The Blues belt Melbourne by 54 points at Princes Park. 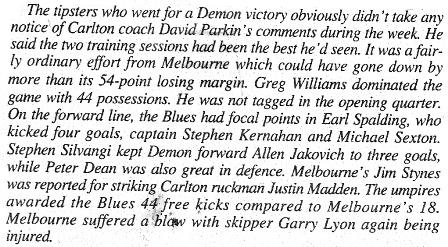 Carlton would take on the Demons in this Round 10 clash and thrash them at our spiritual home, Princes Park. At the time, Carlton and Melbourne sat 10th and 11th on the ladder, with the Demons under us but with a higher percentage, so this match looked as an early-season litmus test for Carlton. Not only would we win by 9 goals, but we would start a promising run of mid-season form that would propel us into the finals.

With 43 scoring shots to 19, you can imagine what sort of game it was – the Blues were dominant and if anything, over-possessive and wasteful in front of goal. But a number of players would get their hands on the ball a large number of times, feeding form into the line-up. Greg Williams would annihilate the Demons with 44 possessions and 1 goal, Kernahan would take 12 marks but kick 2 goals 4, Gleeson would be everywhere and kick 3 goals 3 to add some more goals to his impressive 1993 form (swapping rover / forward pocket roles with Brent Heaver), and Brett Sholl would have arguably his best game for Carlton with 28 possessions.

But it was Mil Hanna who would take the 3 votes from Madden and Silvagni. Nothing against Hanna, who was having a good year, but 19 disposals didn’t warrant the 3 votes. Williams would miss out completely in a match where he must have pencilled himself in for 3, or 2 at least, but it would be Williams who would miss out on the 1993 Brownlow – probably because of this game. The controversy re-erupted late in Season 2006 when an umpire of the day, Bird, admitted he had wanted to give Diesel some votes but was overruled by Russo. It still hurts the Carlton faithful to the core - and is an incident worth highlighting here on site.

Regardless, the Blues were now on their way – a midfield on fire, forwards in form and a whopping 355 possessions to share amongst the 21 Navy Blues.

1985 - Adrian Battison & Frank Marchesani in an advert. for Italian TV.