Carlton defeated South Melbourne by 9 points at the Lakeside Oval.

Back in round 5, Carlton had been beaten narrowly but well by South Melbourne at Princes Park. Since then, the Blues had lost only once – to Geelong in round 7 - on the way to ladder leadership and flag favouritism. Meanwhile, South had enjoyed a consistent season and were hanging on to fourth place.

The Bloods always seemed to find something extra against the Blues in the early years of the VFL, and this game was no exception. On a cold and wet Saturday afternoon at the Lakeside Oval, South matched their visitors in an enthralling contest that had both sets of supporters roaring from the opening bounce. Carlton held the lead after each quarter, but oh so narrowly. There was 2 points in it at quarter time, 3 points at half time, and only 1 point between them when the final term began. A crucial set shot goal by George Topping late in the quarter then gave the Blues a 9-point break, and they defended grimly in the closing minutes to win by that margin.

For the first time in many weeks, Carlton’s key forwards Frank Caine and Harvey Kelly were held goalless by a gritty Bloods’ defence. But equally, Carlton’s defenders kept a tight rein on South’s danger men, and this hard-fought victory was made even sweeter by Fitzroy’s win over St Kilda at Brunswick St. With the Saints defeated again, Carlton was now once again 4 points clear on top of the ladder. In another upset, Melbourne defeated Geelong at the MCG, and Collingwood thrashed Essendon at Victoria Park. The Magpies’ Dick Lee kicked four goals in that match, to overhaul ‘Silver’ Caine at the top of the goal-kicking table. Lee now had 26 majors for the season, and Caine 23. Topping moved up to fourth with his two goals against South Melbourne, taking his total to 19.

The four leading teams on the ladder were now Carlton, Collingwood, St Kilda and South Melbourne, with Geelong still in contention in fifth.

At the end of this round Carlton were in 1st spot on the ladder with a percentage of 157.1. 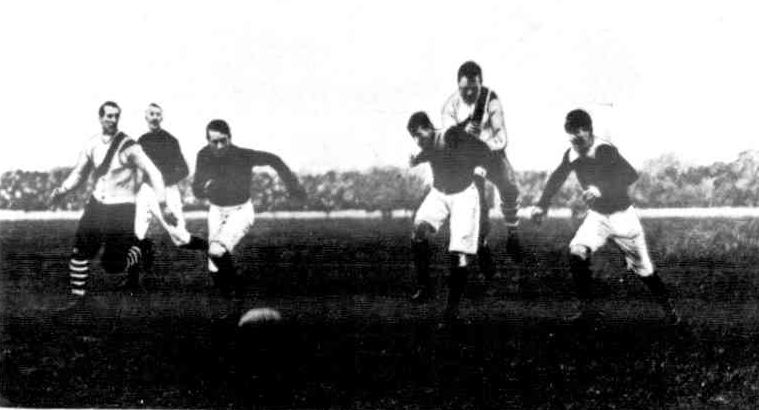