A match which at the time seemed likely to decide the fate of the dreaded wooden spoon was decided comfortably in the Blues favour. As it happened Carlton would finish 7th of 9 whilst St Kilda did indeed collect yet another timber implement.

"...... the fact remains that the game for most part degenerated into a general scramble, in which tripping, punching and every manner of unfair tactics were practiced. It looked at one period as though it were the old time schoolboys' game of 'no man standing,' for there were players stretchered out all over the ground, and so busy were the trainers that some of the disabled ones had to receive attention from other players until the trainers could take them in hand." (Sporting Globe July 16 p12)

Captain calls for the count - but can't.
St Kilda captain Wels Eicke stunned the crowd during the second quarter of the game against Carlton when he demanded a count, claiming that there were 19 opposition players on the field. Play was halted and the teams lined up in the centre as the umpires solemnly counted the players. At the conclusion of the count, the umpire called Eicke over and informed him that only the regulation 18 Carlton players were playing. Players were sent back to their positions and the game resumed with Carlton running out easy winners over the hapless Saints. - 100 Years of Australian Rules Football.
The Horsham Times ran an account of the incident.
To view click here> http://nla.gov.au/nla.news-article72748450

At the end of this round Carlton were in 7th spot on the ladder with a percentage of 99.8. 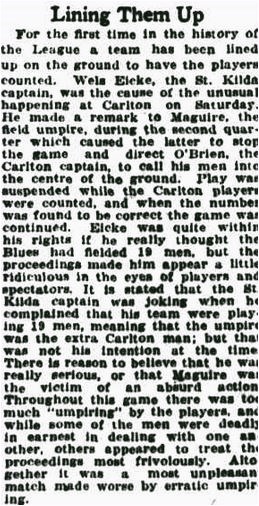