With 'Soapy' Vallence out injured, 'Mickey' Crisp filled the breach - producing an 8 goal performance. Poor conversion in front of goals prevented this margin from being a total thrashing.

Carlton, seeking its tenth straight win, announced four changes to the side for this match. Among them were Harry Vallence, who had not recovered from his shoulder injury and could not be considered. Keith Shea, a 17 year old from Bacchus Marsh was selected for his first game.

Frank Gill was a late withdrawal due to leg injury and was replaced by Young.

Fitzroy, kicking with the wind, kicked the first goal of what was to be a very even opening term. Crisp, from a free, opened Carlton’s scoring. Jack Green and Crisp were both playing well. Good work from Opray and Johnson resulted in Green taking a great mark and converting to level the score. Another fine grab from Green gave Carlton its third goal and the lead. After Crisp hit the post, Fitzroy rebounded and scored the next two majors. Carlton responded with two goals to Crisp. A goal to Fitzroy late in the term meant that Carlton lead by two points at quarter time.

Carlton attacked persistently in the second quarter, but indifferent kicking for goal meant that Fitzroy were keeping in the contest. Green hit the post early in the quarter, before Fitzroy goaled to take the lead. Davey, missed from a place kick, before Crisp scored Carlton’s sixth goal. Carlton was now winning in the ruck and Gilby, Mackie and Huxtable were playing well in defence, repelling any Fitzroy attacks. Cooper, showing great pace, scored a running goal and shortly after, fine work from Johnson and Shea gave Crisp his fifth goal. After Shea missed a couple of chances, Crisp kicked Carlton’s ninth goal to lead by 25 points at the long break.

The third quarter was a scrambling congested affair, with the wind making the game a poor spectacle. An early Fitzroy goal was answered by Johnson, who kicked truly from a free. Another from Shea followed soon after. Davey was now dominant in the ruck and Carlton were receiving great drive from Kelly on the wing. Fitzroy, now playing better, kicked two goals but Clarke marked and goaled to keep Carlton’s handy lead. A late Fitzroy goal meant that they trailed by 21 points at the last change. Carlton, playing a physical game, were gradually wearing Fitzroy down.

The last quarter was again congested and the game had now become dull, as Fitzroy had dropped right out of the contest. Although the Maroons kicked three for the quarter, Carlton were on top all over and kicked six goals. Cooper kicked the first and last goals, and others came from Johnson, Clarke and two from Crisp. Johnson’s goal, from a running drop kick from 40 yards out on an acute angle was the highlight of the term. On the siren, Carlton had recorded a 45 point win.

At the end of this round Carlton were in 2nd spot on the ladder with a percentage of 133.4. 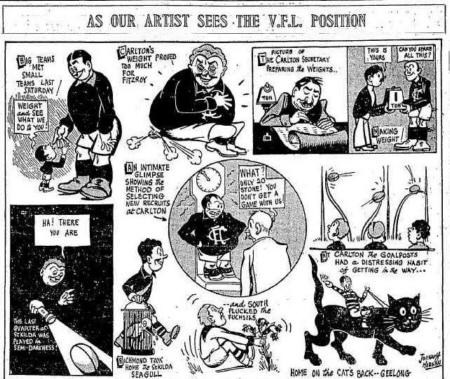