At last - John Barker's Blues knocked over Port Adelaide by 4 points at the MCG.

Carlton notched up their second win of the season (and their first in Australia since August 9, 2014) by holding off off a fast-finishing Port Adelaide on this Saturday afternoon at the MCG. In their third outing under caretaker coach John Barker, the Blues built on their resurgence and played with a new-found freedom, matching the previous season’s Preliminary Finalists for pace and intensity to win a thriller by just four points. 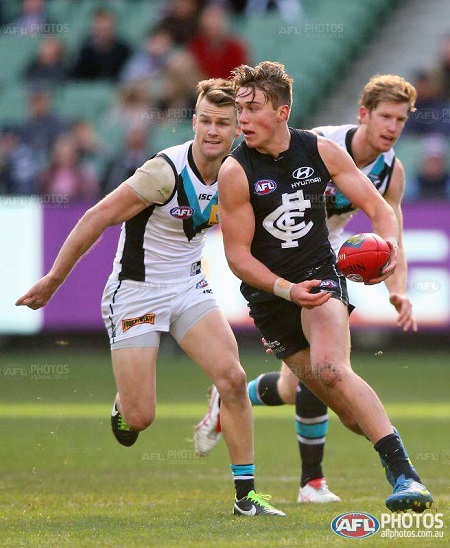 Already in a plight, Port Adelaide fans left the MCG furious after two controversial incidents. The first came two minutes before half-time, when their star midfielder Robbie Gray was slung to the ground in a heavy tackle by Bryce Gibbs. Gray had been one of the most influential players on the ground to that point, until he was carried from the field with concussion and substituted out of the match. The second incident occurred when the Power’s Sam Colquhoun was paid a mark inside the 50-metre arc with barely a minute left on the clock. Power fans were in rapture, until it was realised that a second umpire had ruled that the ball had been touched off the boot. A ball-up was called, and Carlton cleared the ball away with another passage of desperate, determined play.

The Blues went into this game with their season in tatters and only pride on the line. Two changes to the side beaten by Adelaide in round 10 saw Chris Yarran and Bryce Gibbs included for retired champion Chris Judd, with small forward Jason Tutt omitted. In something of a surprise, Andrew Walker was named as substitute. A cool, clear day greeted an understandably small crowd of less than 28,000, including the Power’s incredibly noisy, one-eyed cheer squad.

During his pre-match press interviews, Port Adelaide coach Ken Hinkley had promised that his team was about to return to the hard-running, intense style of play that had served them so well in 2014. “Put your seat belts on,” he told radio station 3AW. The Blues were up for a contest however, and the opening exchanges were fierce. Port kicked the first two goals before the Blues steadied, and with Pat Cripps, Lachie Henderson and Andrejs Everitt leading the way, Carlton trailed by one point at quarter time. It had been an exhilarating quarter of frantic end to end football, with both sides making errors, but moving the ball at break-neck speed up and down the ground.

The second term was much the same. Each team seized the initiative and scored quickly in bursts, inspired by two of the most exciting young players in the game; Chad Wingard of Port Adelaide, and Patrick Cripps of Carlton. To any non-aligned fan, the joy of watching these two in action was well worth the price of admission. When Cripps was involved in a chain of handpasses from deep in defence, and Everitt goaled at the 18-minute mark, the Blues were suddenly in front by 23 points. Port responded with the next three majors, and nosed ahead by a kick approaching half-time. It was then that Gibbs swooped on Gray near the boundary on centre wing, and slung him heavily to the turf. With his arms pinned, Gray’s head slammed into the ground and he appeared to be out cold. A melee ensued as Port players went after Gibbs, but the situation cooled down when Gray gave a thumbs-up to the crowd from his stretcher as he left the field with 15 disposals, 8 clearances and two goals to his name.

With Gray substituted out the match, Carlton seized the initiative in the third quarter and began to dominate the clearances. Led by their captain Marc Murphy, Cripps, Carrazzo, Graham, Curnow and Bell began racking up the stats as the Blues added 5.4 to 2.3 for the quarter to take a four-goal advantage into the last term. Meanwhile, the two Sams; Rowe and Docherty, were playing with real poise in defence, where Port’s normally dangerous full-forward Jay Schulz had hardly had a kick.

The likelihood of a huge upset increased in the first minute of the final term, when Troy Menzel snapped a clever goal to put his team up by five goals. Port replied quickly, then Wingard kicked his fifth major of the match from wide out on the boundary and the momentum was once again with the visitors. Time and again they surged forward, and when their captain Travis Boak snapped truly after 21 minutes of mayhem, Port had cut their deficit to less than a goal. Everitt’s miss with a set shot from close in could have been disastrous – especially if Port’s Colquhoun had been paid that last-minute contentious mark – but the desperate Blues held on to earn a gutsy win.

The most pleasing aspect of this badly-needed victory was that Carlton had no passengers. Everyone in the navy blue guernsey contributed, with Cripps, Murphy, Carrazzo, Bell, Rowe and Curnow outstanding. The focussed attitude of John Barker impressed too, when he said post-match, “We've unshackled them a bit in terms of the way they use the ball, and that's given them a little bit of confidence. It’s three weeks now that we've given a really strong competitive effort, and it's grown marginally each week.”

However, the task ahead for the Blues’ coach was made just that bit more difficult on the Monday after the game, when Gibbs' tackle on Gray was ruled as unduly rough play by the Match Review Panel, and he was suspended for two matches.

Interesting Fact: This was Carlton's first win in Australia for the year. Beforehand, the Blues' only previous victory had come against St Kilda in New Zealand in round 4.