Round 13 proved very unlucky for Collingwood, who travelled to Princes Park for this Match of the Day full of confidence, only to be narrowly, but clearly beaten by a slick Carlton combination. The Magpies led by four goals early in the third term, but a brilliant burst by Carlton's star rover Trevor Keogh - who kicked three goals in eight minutes - sparked a Blues' revival. After that, a solid Carlton defence held Collingwood at bay for a confidence-boosting win. Carlton maintained top spot on the ladder, two points clear of St Kilda, with Essendon, Richmond and Hawthorn next.

Blues Cruise
Collingwood's finals prospects were not improved by the eight-point loss to the super effective and clinical Carlton team. Carlton's effort was another typical professional performance and there is no doubt the Blues are the side to beat for this year's premiership. General John Nicholls, Peter Jones and David McKay were influential ruckmen while a match-winning move came for Carlton when Ian Robertson went to the centre and Alex Jesaulenko to full-forward after half-time. With centre half-forward Robert Walls able to gain control against Ted Potter in the third quarter, Carlton was able to apply considerable pressure in the last half. - Graeme Kelly; The Australian.

The Professionals
The professional Carlton side gave Collingwood the 'Blues' in their encounter at Princes Park and proved that the game is not finished until the final siren. It must have been disappointing for Collingwood to lose by eight points after leading for most of the day. The Magpies desperately needed this victory but in the final quarter when the pressure was on and Collingwood needed to fight for its life, the majority of the players let the side down. The Carlton players went about their business of methodically destroying the opposition and maintained their standard right through the game. In contrast the Collingwood players lacked concentration and desire under pressure. Carlton is truly a professional side. The team continues to play well every week and I would suggest that Carlton and St Kilda are the only two sides now playing assured of a final five place. A great comeback by Ian Robertson on the half forward-flank and in the centre and by Bryan Quirk on the wing gave Carlton tremendous drive. Interesting feature of the side - with so many class players in the team - is that invariably a new star bobs up each week. Against Collingwood it was Robertson. It is good to see rover Adrian Gallagher coming back so well and hitting top-notch form for the Blues. - Polly Farmer; The Australian.

I was happy with our last half. We have a history of playing two bad quarters against Collingwood, but it is no use continually coming from behind. We let them get possession too easily and did not apply any pressure before half-time. I noticed before the game that our players had a poor attitude, but at the interval they all realised something had to be done. In the finish we should have won more easily. - John Nicholls. 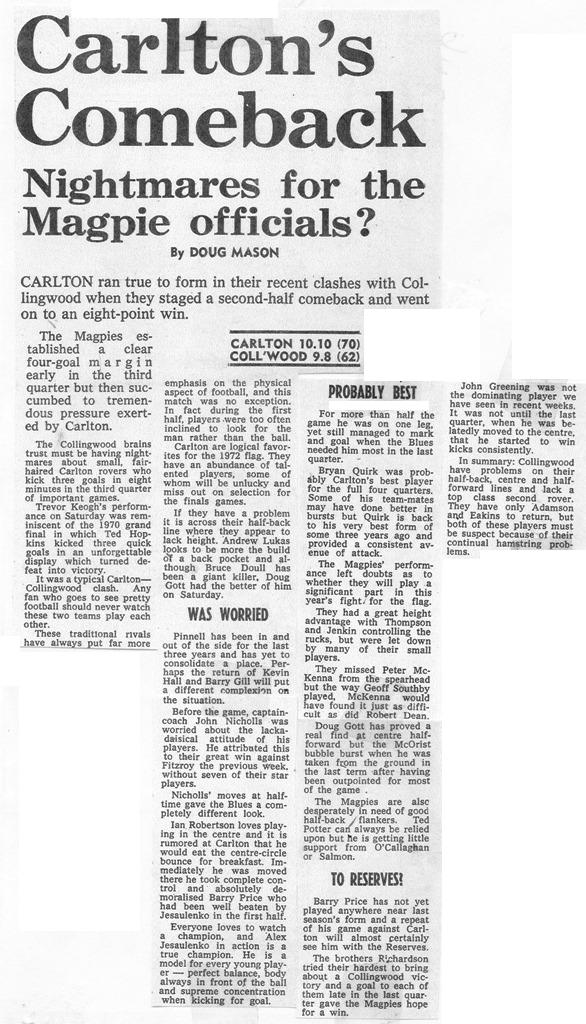