Carlton lost to Richmond by 13 points at Princes Park.

The Blues couldn't catch up from a disastrous second quarter, one in which we gave up 8 goals to 4.

The loss the previous week to South Melbourne had made Carlton’s finals battle difficult. With five games remaining, the Blues were a game outside the four, needing to win each game. Two of those five games were against teams already in the four, Richmond and Geelong. With Richmond only a game up and holding a narrow percentage lead, a Carlton win in this game could see Richmond displaced.

The Blues made five changes to the side defeated by South Melbourne in round 13. Frank Gill (influenza), Jim Park (sprained ankle), Fred Gilby (sprained ankle) and Jack Cooper were all out injured and George Dougherty was omitted. Jack Cashman, Frank Dunn and Ted Pollock had recovered from injuries and Bernie Treweek and Dave Arrell (19th man) were included for their debut games. Despite the injury list, the Blues were confident of a strong showing against their fierce rival.

The ground was slightly heavy but conditions good as Mocha Johnson won the toss and kicked with a light breeze to the Garton Street end. Play was scrambly early with weight being freely used by both sides. Several players were downed in a rough and tumble opening, in which players seemed over-anxious. Richmond opened their scoring with a behind and then Vallence scored a minor score. Richmond were wasting early chances, twice kicking out of bounds from set shots at goal. The Tigers’ first goal came from a free, after Johnson was deemed to have run too far with the ball. Carlton’s play was aggressive but they too were wasting chances at goal. Cooper passed to Clarke for a behind, before Richmond got their second goal from another free, the umpire failing to notice a clear mark to De Luca. Carlton went into attack again, but Bullen missed an easy chance after receiving a free at point blank range. The forward play from both sides to this point had been fairly ordinary. Francis and first gamer Treweek were playing well early. Anderson, at centre half forward, received a free and his 60 yard drop kick goal was the highlight of the quarter. Richmond was generally on top, and seemed to be getting the benefit of the umpiring decisions. The Tiger defence was keeping Shea and Vallence, at full forward, quiet and it was paying off. At the first change, Richmond led by three behinds.

Richmond opened the second term with two goals, the first of which came from a long shot at goal. A doubtful free brought their third goal of the quarter. The Tigers were continually into attack and Carlton’s defence under pressure. Francis was moved into the ruck in an attempt to stop Richmond’s dominance. Huxtable and Johnson combined well to repel an attack and send the ball to Vallence, whose shot fell short, but the quick thinking Anderson scored Carlton’s second goal with a snap off the ground. This seemed to lift the Blues and Cashman passed to Anderson who goaled again with a running drop kick. A change had come over the game and Carlton, against the wind, had rallied. From a free kick, Cashman scored Carlton’s third for the quarter. De Luca and Dunn each stopped Richmond attacks with good marks, before the umpire missed an obvious free to De Luca, allowing Richmond to score their sixth goal. Richmond had steadied and another goal came after a forward eluded several Blue defenders. Their eighth goal came from a nice mark. Carlton launched an attack across the ground, resulting in a running goal to Shea, but Richmond answered with a snap from a half forward scrimmage. Richmond was on top in the centre, giving them great leverage in attack. Another attack saw a forward left unattended in the forward pocket and the tenth Tiger goal was the result. It had been Richmond’s quarter, with eight goals, giving a 31 point lead at half time. The game had not been of a high standard to half time. Carlton standouts were Francis, Cashman, Anderson, Huxtable and De Luca.

On resumption, Carlton moved Vallence to a half forward flank and Crisp to full forward as both players had been quiet in the first half. Carlton attacked from the outset and Shea kicked a lovely goal from near the wing. The Blues had lifted and only poor kicking for goal was preventing them from closing the score gap. Three attacks resulted in three minor scores, the last of which was another long drop kick of 70 yards from Anderson. De Luca, defending well, helped Cooper to another single, before Shea kicked his third goal. The crowd now become quite excited as attacks mounted by Carlton. Green passed to Cashman who missed from a free kick, and then Cooper marked on the half forward flank and kicked truly for Carlton’s eighth goal. Carlton was now on even terms in the ruck, with Cashman and Pollock playing well. Vallence brought the deficit to three points with a snap goal from an acute angle not long before the bell for three quarter time sounded. It had been Carlton’s quarter, keeping Richmond to two behinds, and only missed shots and unsystematic forward play had prevented a Carlton lead.

Both sides knew that their seasons were on the line and a tense, thrilling last quarter began. Attacking straight away, Richmond scored three behinds, before a snap eluded De Luca and rolled through for a goal. The luckless De Luca claimed to have touched it but he had had a dirty day with the umpire’s decisions. Vallence marked twice and sent Carlton into attack but both were repelled. Then a mistake from first gamer Treweek let Richmond in for their second of the quarter and a three goal lead. It could have been all over at that point but this Carlton side was not done yet. The Blues rallied and Shea handballed cleverly to Crisp who snapped truly for a goal. Huxtable, Pollock and Vallence featured in a chain of short passes and Vallence was able to handball to Cooper for another. Anderson went down with a strained leg muscle and was replaced by Arrell, who was into the play immediately, passing to Cashman who took a fine high mark. His long kick went through and scores were level. The crowd was rocking with excitement, as what had been a mediocre game to date had come to life, with the finals beckoning for both sides. Carlton attacked again through Huxtable and Cashman took another fine mark. His kick went to the pocket from where Arrell swooped on the ball and put the Blues a goal in front. Richmond was now under pressure but they levelled the scores with a twisty punt goal from a puzzling free kick paid near goal. Another free in the centre resulted in a long kick into attack for another Richmond goal. And when a Tiger forward evaded three opponents for the third major in a row, Richmond had a lead of thirteen points. The game was held up with Arrell being attended to after being knocked down by a Richmond player who was reported. Richmond were steadier and settled and scored their sixteenth goal near the end. A final Carlton attack came through Shea, who passed to Cashman close to goal for the fourteenth Carlton goal but the bell sounded shortly after, signalling a Richmond win by thirteen points. Carlton could hold their heads up but their finals chances were now remote.

After this round, Carlton held 5th spot on the ladder, with a percentage of 117.0. 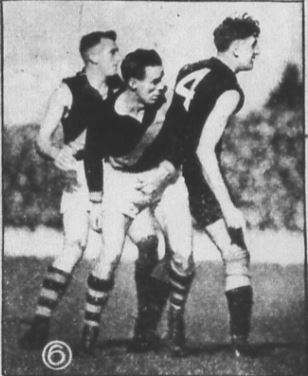 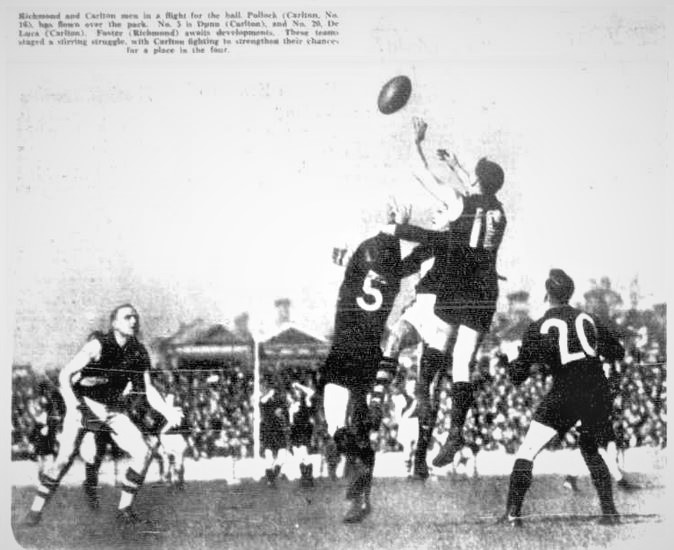