Carlton lose to Fitzroy by 1 point at the Brunswick Street Oval.

The ground was in poor condition. It was very muddy with the centre area covered with sheets of water.
At the bounce Jack Howell thumped the ball towards the goals. A miskick by a Fitzroy player resulted in a free kick to Jack Mills and his kick bought up the Blues' first goal within just thirty seconds of the start.
Arthur Hodgson was providing plenty of drive and the home side could not contain him. The Blues were winning in the air and were faster than the Maroons. However Carlton were letting themselves down with poor kicking for goal. When Fitzroy goaled they hit the front. The lead was regained when Jack Spencer kicked accuately. At quarter time the Blues led by 5 points. 2.4 - 1.5
Fitzroy had the best of the second quarter. The shocking conditions resulted in a scrambling game highlighted by heavy bumps. Bill MIlroy was switched to full forward and Keith Warbuton took over Milroy's position. The heavy conditions were taking its toll with the Blues' speed being diminished. Fred Davies scored Carlton solitary goal. At half time the Blues trailled by 4 points. 3.5 - 3.9
The Blues went into attack and Keith Warburton's great snap for goal bounced inches from the goal line and then bounced back into play. Jack Spencer's skill and determination enabled him to goal and regain the lead. Carlton had regained its speed which was a worry for the oposition. However the Fitzroy backs were up to the challenge. Fine play by Laurie Kerr was providing opportunities for the Carlton forwards, but Bill Milroy and Keith Warburton both missed easy chances. This term was dominated by Carlton, but Fitzroy made the most of its limited forward entries by scoring a goal. At three quarter time the Blues were behind by 3 points. 4.10 - 4.13
Fitzroy goaled and extended the lead to 9 points and then added another behind. Jack Spencer's running goal reduced the margin to four points. Jack Spencer had a shot which hit the post and then Keith Warburton's shot just missed. With five minutes remaining Carlton were just 1 point down. Fitzroy attacked but only added a behind. Well into time on, Laurie Kerr tried to lift his team and through his superb efforts he twice drove the ball deep into Carlton's forward line. Once again the Blues' forwards let him down with Keith Warburton missing a relatively easy chance. Carlton lost the match by 1 point. 5.14 - 5.15 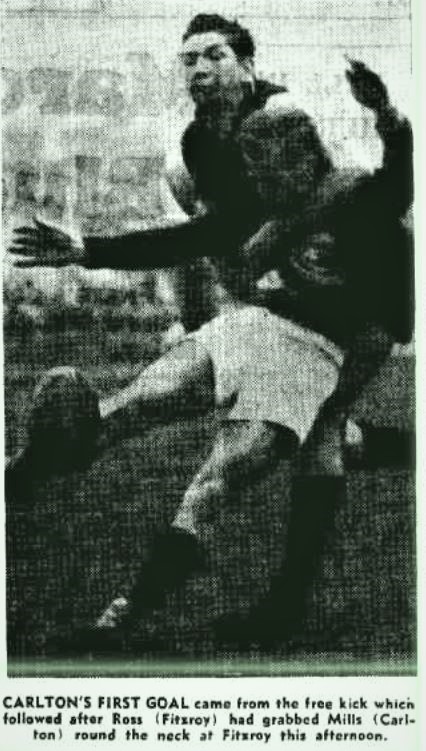