Carlton lost to the Kangaroos by 12 points in the mud at Coburg Oval.

North down Blues
An unpredictable North Melbourne accounted for Carlton in a tough, slogging game played in deplorable conditions at the Coburg Oval. Although they held a 6-point lead at half time, the Blues faded in the second half and scored only one point. Noel Teasdale, despite strong opposition from John Nicholls, was the inspiration for North. Bernie McCarthy was unbeaten all day at centre half-forward. John Dugdale defended superbly while John Ibrahim and Michael Dowdle snapped up the opportunities around the packs. Sergio Silvagni and John Benetti were consistent for Carlton. Gordon Collis in the centre and Berkeley Cox in attack were the best of the others. North showed a lot of talent and are capable of surprising teams much higher on the ladder. Carlton now face three hard games and their chance of playing in the finals is fading rapidly. - Football Record.

"Field umpire Ron Brophy took one look at the cow paddock conditions at Coburg and shuddered. The conditions were so bad that Brophy did not attempt to bounce the ball and threw it up.
Only one player North's Tom Allison - was brave enough to try a drop kick. But, after one attempt Allison dropped the idea and reverted to punts." Age August 09 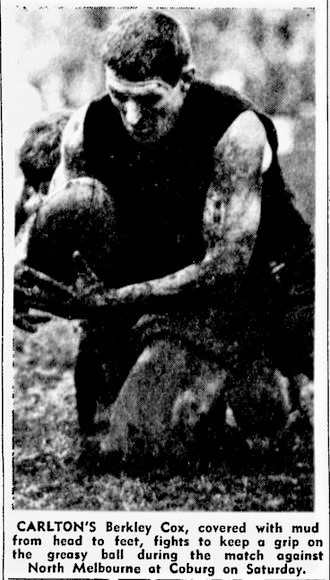 Score Records: This remains Carlton's lowest ever score against the Kangaroos