Still seething after a heavy defeat by Richmond in round 14, the Navy Blues came out smokin' against South Melbourne at Princes Park, and stamped their authority on the game with a 7-goal first quarter to set up a huge win. Brent Crosswell - after a mid-season flat patch - snapped back into form, and lively half-forward Syd Jackson celebrated his return to the side with a vintage display.
With this percentage booster, Carlton moved 6 points clear of Richmond at the top of the ladder. St Kilda, Hawthorn and Collingwood made up the top five, with Essendon and Footscray the only other real threats.

I felt sorry for South Melbourne, which faced Carlton after its setback last week. A top side is a dangerous foe, and Carlton is one of the best. Brent Crosswell is back to his glorious best and Syd Jackson made the most of his chances. South Melbourne was well defeated but there are teams with a great deal more potential and class than the Swans which would have performed a lot worse. - Polly Farmer; The Australian.


A 7-2 burst in the third quarter enabled Carlton to completely over-run a dispirited South Melbourne. Pleasing aspect of this win was the return to form of brilliant ruck-rover Brent Crosswell, and colourful half-forward Syd Jackson who both gave the Blues plenty of drive and spirit. - Michael Stevens; The Australian.


The Fade-Aways
It was the same old story for South Melbourne. They just couldn't last the distance. They more than matched Carlton for a half, then just faded away. They simply lacked the height and weight to compete with Carlton for four quarters. South controlled the air through Cook, had a nippy rover in Goss and had a surprising amount of the footy. But the height, weight and greater physical strength of the Blues gradually wore them down. Carlton's accuracy around goal in the greasy conditions was incredible but they still have obvious problems. Syd Jackson was the only effective forward while Robert Walls was sadly out of touch. Brent Crosswell dominated play and his rugged dashes through packs unsettled the Swans on many occassions. Swans players were giving their forwards opportunities but they simply lacked the skill to get on top of the Carlton defence. - Inside Football.


We were reasonably happy with our win even though we lapsed in the final term when a few more goals would have boosted our percentage. It was a real team effort and it must be realised two of our best players Jesaulenko and Waite, were on the sidelines. - John Nicholls. 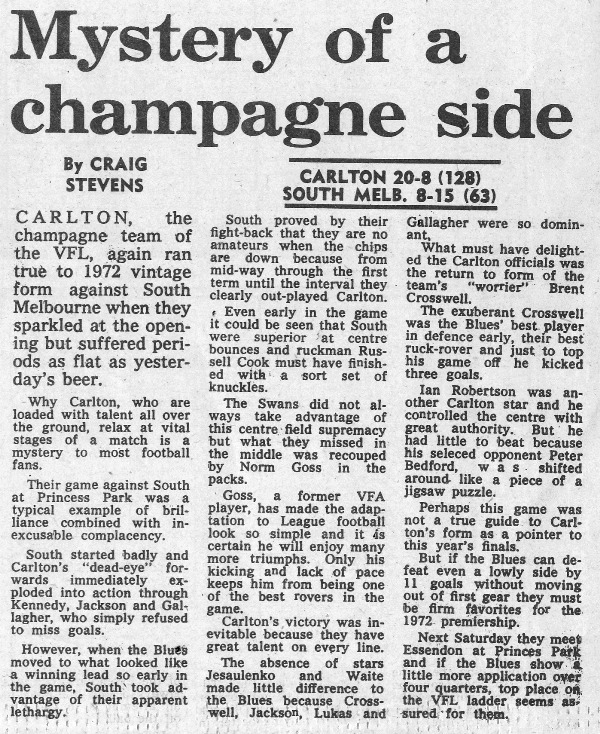 Tuesday's Age (p23) speculated that Alex Jesaulenko may be rested for this match.
He played, "like a tired man against Richmond on Saturday winning only eight kicks - hardly his normal quota. He has carried a tremendous workload for the Blues this season, and had his share of injuries."