A four-game losing slump between rounds 6 and 10 had left the Blues teeteering at 5 wins and 5 losses, before the team recovered to post another five successive wins - albeit against mediocre opposition. This clash against one of the other flag favourites would reveal more, especially since the super star of the early-season, Alex Jesaulenko, had been held to ordinary games in in recent weeks, and Carlton would need more from him if they were to challenge for the flag.

After a tight, physical contest through the first half, Carlton - with Jesaulenko back to his brilliant best - got right on top in the third quarter and bolted to a 38 point lead. But the Saints weren't finished, and they struck back with three unanswered goals of their own, cutting the deficit to 18 points midway though the term. It was then that Jesaulenko, who had already proven too good for champion Saint full-back Bob Murray, added his eighth and ninth goals against his new opponent Barry Lawrence to seal the win. Jesaulenko's big haul grabbed all the headlines, but the laurels for Best on Ground went to the Blues' outstanding centreman Ian Robertson, whose strong marking and long, accurate kicking provided many of Jesaulenko's sscoring opportunities. 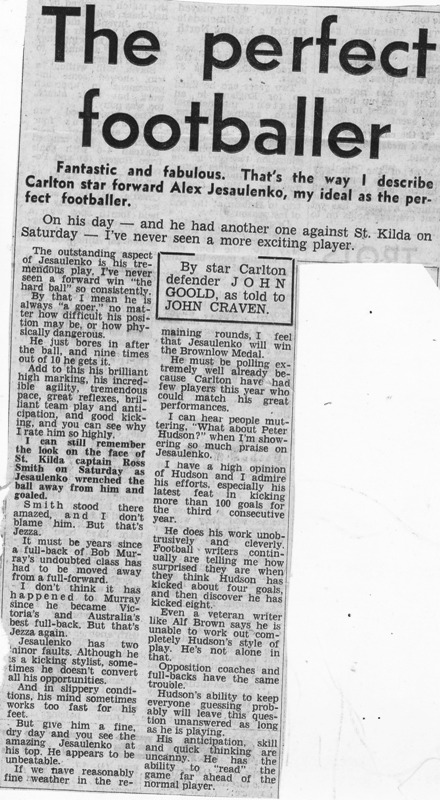