Loading...
Round 17, 1936         Carlton defeated Collingwood by 1 point at Victoria Park. Jack Wrout kicked the winning point in the final moments.

Collingwood kicked with the wind in the first term and led by a commanding 39 points. The Blues had the advantage of the wind and the umpire's decisions in the second quarter, with 12 frees to 2. Keith Dunn, and then Vallence, who had been quiet, goaled, then Ansell Clarke twice goaled, Harry Vallence scored another just before half time. After half time against the strong wind, three goals to Wrout, and one to Vallence, found the Blues 17 points down. The Blues had kept the pressure on Collingwood by scoring 4 goals, but importantly, had the wind in the final quarter. The Woods had been playing the man, and the free kicks for this term were 11-5 in Carlton's favour.

The last quarter was real thriller!
Collingwood hit the post, then Eric Huxtable with a thrilling dash eluded eight Magpies, his long kick to the forward pocket was snapped up by Clarke, who baulked, shot the ball across to Will Kuhlken, who goaled, to reduce the lead to 12 points. The Woods again goaled to increase the lead. Hale, Wrout, and Francis' heroic efforts only brought behinds.

"Imagine the excitement when a mighty torpedo punt from Vallence from well out on the half forward flank fell through the goal, and a free to Green, who was dragged down, bought another free kick and a goal with the wind. Roaring at top voice, thousands of Carlton supporters urged their champions on, and the extraordinary excitement communicated itself to the contestants. Carlton were all but six points behind with four minutes of play to go."

The opposition attacked, but the move was brilliantly saved by Jim Park. "A mistimed kick fell short, and in a scrimmage Cooper was fouled, and to the stupefaction of the defenders his kick, not rising more than 4 feet from the ground, travelled forty yards straight to A. Clarke standing in front of the goal-base crush who levelled the scores..." 30,000 people held their breath, with just seconds to go the scores were all tied up 13.12 all. Horrie Bullen's kick was contested by Wrout who received a free, and his kick went through for a behind. For the first time in the match, Carlton led. Jack Hale obtained possession and was running in for a certain goal when the bell rang.

"The trophy for the best player on the side was handed to H. Bullen, who played splendidly against almost overwhelming odds all day, and who won the game at the finish when he "caught" Pannam who was always inclined to over-run with the ball. Clarke who is now at the top of his form, secured the second trophy, and had there been another gallant Huxtable would have certainly been in the running, with Hale and Wrout a close fourth and fifth. Anderson, Vallence and McIntyre gave solid service, and practically every other player rendered yeoman service." (The Age)
The Argus gave Clarke BOG.

After the match, and after the congratulatory speech was made by the Carlton president Dave Crone, Collingwood's treasurer R. T. Rush unusually visited Carlton's rooms. "....it was not customary for Collingwood to visit the winning room, but in view of Carlton's well-merited victory they wished to offer Collingwood's congratulations. (Loud Applause) Mr. R. T. Rush reminded listeners that back in 1892 Collingwood had received the whole of the gate from Carlton as a gesture of goodwill from the more powerful Carlton club. He said Collingwood had never forgotten that. They were old and friendly rivals, and the way Collingwood had played that day must have convinced everyone that they were all out to win. (Applause) - The Age

At the end of this round Carlton were in 3rd spot on the ladder with a percentage of 126.8. 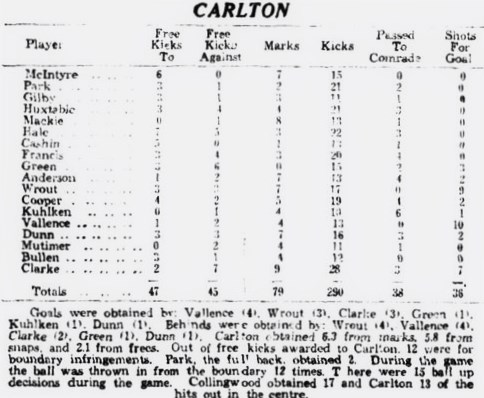 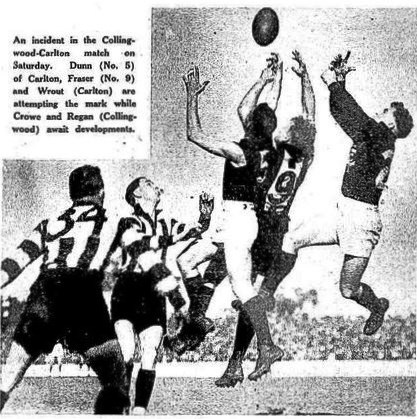 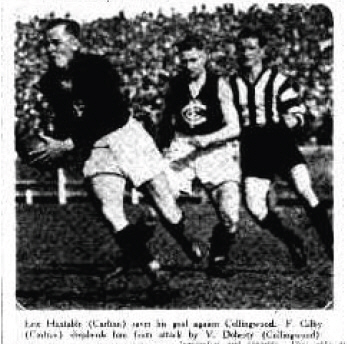