Carlton moved into fourth spot on the ladder with this win against Hawthorn out at Waverley. Clearly the dominant team, Carlton were messy in front of goal which allowed Hawthorn to stay in touch at their home ground. Rohan Welsh in particular was struggling in front of goal, with 3 goals 3 behinds, but a big bag of 6 would have built his confidence before Kernahan returned from injury. In their trademark 1993 way, the Blues would be level or closely behind at half time, and then blow the game their way with huge second halves.

Key players were Williams, with 37 stats, Madden with 21 stats and 18 hit-outs, plus Ratten, Brown and Bradley in the middle. The surprise packet was Ang Christou who would line up on the wing and kick 4 goals. 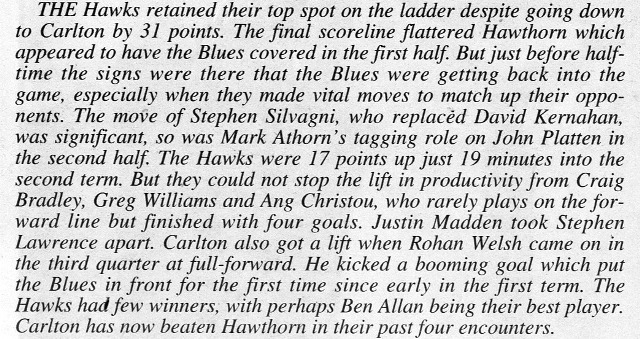