Carlton lost to West Coast by 59 points at Subiaco

At stake in this vital game was 4th position on the ladder and a home final. Carlton would be forced to travel west and take the Eagles on at their home ground before their fans (who seemed to be able to influence the umpires). Greg Williams' troublesome knee would force him out of action for the rest of the year. 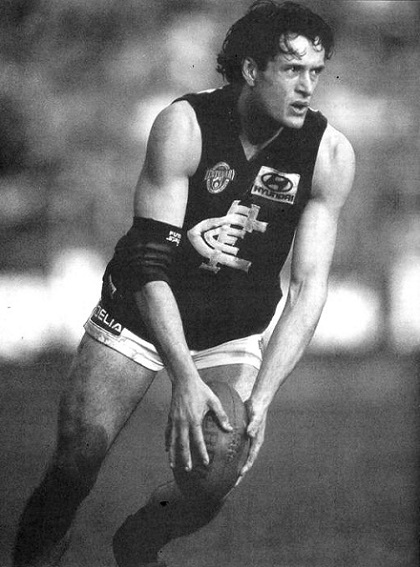 Stephen Kernahan won the toss and elected to kick with the aid of a strong breeze. Inaccurate kicking would leave the Blues 3 points down at quarter time, despite having more scoring shots. The Blues kept in touch with the Eagles for most of the second quarter, largely through Kernahan, who had already booted 5 goals. Unfortunately he would not kick any further goals for the match. But the Eagles started to get on top toward the end of that quarter to take a 22 point half time lead. Against the wind in the 3rd quarter, the Blues kicked the opening goal but the Eagles responded with 4 unanswered goals and the match seemed over. Two late goals by the Blues would reduce the 3/4 time margin to 23 points but a final quarter against the wind would yield just one behind, while the Eagles added 4.7 with it, to run out 59 point winners.

This would not help Carlton's percentage, which was now the worst of all teams in the 8 and leave it in 5th position, a game behind the Eagles.

Craig Bradley would work hard, gathering 32 possessions, despite getting plenty of attention from the Eagles. Brett Ratten would provide plenty of assistance with 23. Ang Christou and Peter Dean worked hard in defence.