In Andrew Walker's last game, St Kilda crushed Carlton by 71 points in a Sunday afternoon massacre at the MCG.

Coming off three successive narrow losses to top-5 teams, Carlton went into this Sunday afternoon match against St Kilda at the MCG aiming to send 202-game stalwart Andrew Walker off with a victory in his last outing for the Blues. Instead, the team crashed to yet another heavy defeat, in a match that proved even more one-sided than the previous meeting between these two clubs in round 12 at Docklands.

Earlier, “Tex” Walker had announced that he would retire from the game after this weekend, so he was recalled to the senior side for a fitting farewell. Dale Thomas was the other inclusion, at the expense of Andrejs Everitt and Liam Sumner. Like Carlton, St Kilda was in a rebuilding phase, but their recent form had been much better than the Blues, and they were perched five rungs and two wins higher on the ladder. 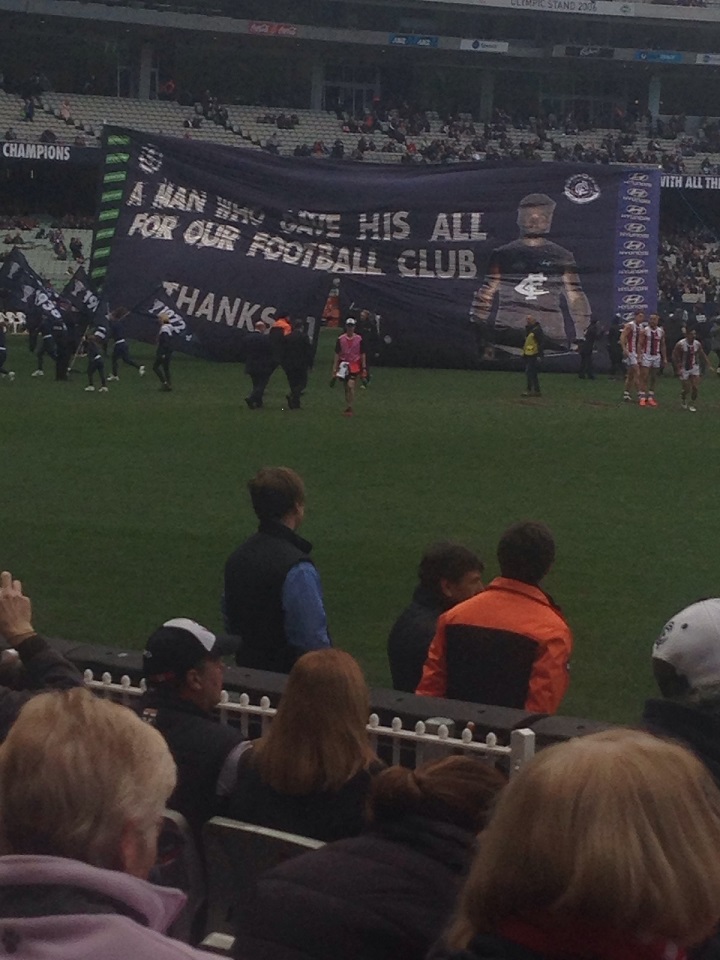 Carlton’s acting captain Kade Simpson won the toss and chose to kick to the city end of the MCG on a fine, cool afternoon in front of a crowd of just under 38,000. Levi Casboult and Matthew Kreuzer lined up in the key forward posts, with Andrew Phillips in the ruck. From the opening bounce, the Blues were sloppy with their disposal and many seemed reluctant to run and create - apart from Simpson and Zach Tuohy, who kicked his team’s opening goal with a signature bomb from outside the 50-metre arc after nine minutes of play. At that moment, Carlton trailed by a point, but that was as close as the Blues were to get to the Saints for the rest of the match.

Superior in all facets of the game, St Kilda ran harder, tackled and smothered more often, and as their confidence grew, they carved their way through Carlton’s defence to lead by a daunting 42 points at half-time. Simpson, Tuohy, Pat Cripps, Sam Docherty and one or two others tried hard to stem the tide, but most of rest just couldn’t get their hands on the football. Poor kicking for goal sapped the Blues’ resolve too, with Casboult, Cripps and Dennis Armfield all missing gettable attempts from close range.

The onslaught continued for the first 20 minutes of the third quarter, blowing Carlton’s deficit out to 65 points before a mini-revival produced late majors to Cripps (2) and Tuohy. Meanwhile, Simpson continued his heroics across half-back with support from Tuohy and Docherty, as St Kilda’s dominance of the centre corridor created a mountain of opportunities for their forwards. Carlton’s resistance broke at last in the final quarter, and the Saints were peppering their goal when the full-time siren brought merciful relief for players and fans alike.

To their credit, the St Kilda team formed a guard of honour as Walker was chaired off the ground, before they rejoiced in their crushing 12-goal victory. Having fallen into a very deep hole and slid to 15th on the ladder, Carlton was left to lick its many wounds, and ponder the club’s next assignment against cellar-dwellers Brisbane one week later at the Gabba.