The bizarre Fog Match, lost to Fitzroy by 23 points at the Junction Oval.

Surely there has never been a more bizarre game of VFL/AFL football than this match between Fitzroy and Carlton at the Junction Oval, St Kilda in August 1971. Needing a solid win over the Lions to keep our faint finals chances alive, Carlton trailed by 15 points as the second half of the game began – just as the bright sunshine was obliterated by an enormous wall of fog that rolled over the ground from nearby Port Phillip Bay. The fog was so dense that suddenly, players only metres apart couldn't see each other, and were forced to rely on their ears as much as their eyes in an effort to find the ball. Meanwhile, the scorers and time keepers caught just brief glimpses of the play, and had to use the emergency umpire to relay the scores. In the end, Fitzroy’s local knowledge gave them the edge. While the Blues groped around in the murk, the Lions finished all over them. Late in the final quarter, the ball came bouncing past Carlton ruckman Peter Jones, who had dropped back into defence. 'There it is!’ he shouted - and a Fitzroy opponent pounced on the ball and goaled. Fitzroy won by four goals, and Carlton missed the finals by 2 points. 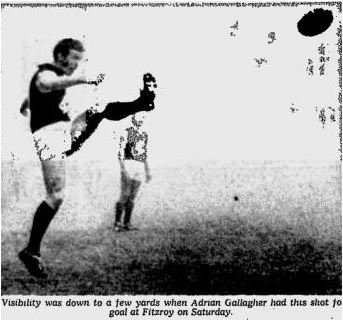 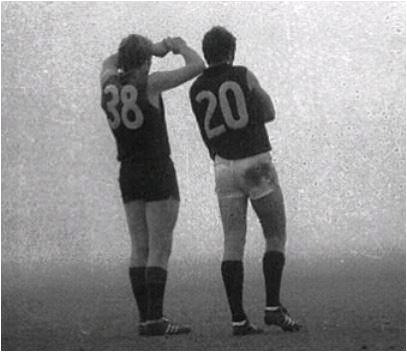