Blues supporters were licking their lips after our exciting first-year full-forward Greg Kennedy played a blinder in this match against Hawthorn at Princes Park. Enjoying silver-service delivery of the football from the likes of Alex Jesaulenko, Ian Robertson and Syd Jackson, Kennedy’s pace and agility bewildered the Hawks’ Premiership full-back Kelvin Moore, and the Carlton tyro finished the day with 12 big goals in Carlton’s emphatic 68-point victory. Only the great Horrie Clover has done better for Carlton, with 13 majors against St Kilda way back in 1921.

Carlton thump the Reigning Premiers
Carlton demoralised Hawthorn with a 68 point triumph. The Carlton camp was ecstatic with the 12 goals kicked by lightly-built full-forward Greg Kennedy. Kennedy, recruited from Bendigo this season, has taken time to blossom but in the past two matches he has really emerged as a top goal-getter. Certainly Kennedy's task was made easier by the superb disposal of Alex Jesaulenko in the centre and Ian Robertson on a wing. Carlton looked extremely like the 1972 premiership winner. The defence is built around Bruce Doull at centre half-back and the cool, calm Geoff Southby at full-back. It must be admitted though that captain-coach John Nicholls and his offsider Peter Jones were forced to lower their colours to Hawthorn's lanky veteran Ken Beck in the ruck. - Graeme Kelly; The Australian.

Blues running hot
Carlton's tremendous victory over Hawthorn makes the Blues almost certainties for this year's premiership flag. The teams below Carlton have tough assignments to fight their way into the Grand Final let alone defeat the Blues. And whichever team makes the grade, Carlton will be there in eager anticpation. Early in the game against Hawthorn, Carlton appeared to be in for a tough match. But the Blues' class told and the way that they methodically took Hawthorn apart confirms everyone's opinion of their ability. Of course, Hawthorn may have the 1971 premiership blues..... and not even make the final five. Carlton centreman Alex Jesaulenko came back to Brownlow Medal form and he is a maximum result man. Everything he does is first-class and he was ably assisted by wingman Ian Robertson and together they were able to take the Hawthorn centreline apart. The Carlton rucks- with Big John Nicholls coming back to form at the right time - gave the side a great advantage and first rover Adrian Gallagher capitalised on his supremacy in the ruck and around the ground. And the boy from the bush - Greg Kennedy - is now producing his Bendigo form at the right time of the year. It has taken Greg a while to become accustomed to the high standard of VFL football. Most country and interstate players have a year of tuition before they are able to adjust their tempo but Kennedy has done it just a little more quickly. Now he is going to be the danger player to opposition sides during the finals series. - Polly Farmer; The Australian.


After a bad first quarter, our players turned on the sort of disciplined football which we have been striving to obtain all season. Each player did his job in what was an all-round team victory. - John Nicholls. 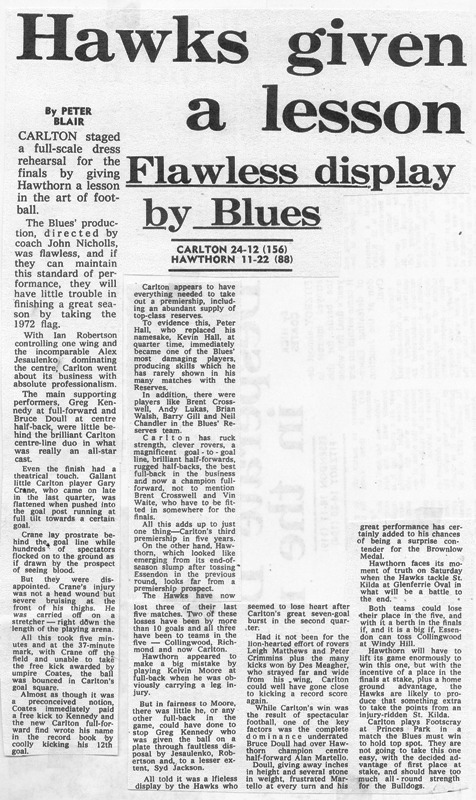