Carlton thrashed Collingwood by 9 goals in front of 85,000 spectators at the MCG.

The Blues would get back into form for the approaching finals with this smashing of the Pies in front of 85,000 people. Led brilliantly by Kernahan who would have 12 shots on goal, kick 7 and demoralise Gary Pert, and Adrian Gleeson with 34 stats as a rover, the Blues would move into third spot on the ladder.

At half time Carlton were up by 2 points and the the rain came and Carlton were harder at the ball and again had a huge second half of 9 goals to 1 was the driver for the Blues. Displaying a defensive brand of football that would underpin the 1995 Premiership, Carlton strangled Collingwood in the second half to grab the game. 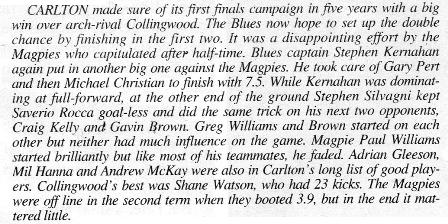