Despite struggling all season, Carlton lifted to thrash Collingwood by nine goals at the MCG. (Cached)

Representatives of Carlton have famously talked up a close win over the 'Pies being a good thing - but how about this one being an ever constantly increasing margin before putting them down in the last! Scott Camporeale kicked 5 majors for Carlton.

Carlton's 55-point thrashing of Collingwood was the Blues biggest victory against the Magpies since 1976 when it defeated them by 57 points. Carlton had its best possession winning game this season with a total of 361 against Collingwood. The total of 160 handballs was the club's highest since Round 18, 1996. Fraser Brown, Brett Ratten and Justin Murphy all had more than 30 possessions for the game, with five other Blues gaining more than 20 touches. Lance Whitnall managed double figures in kicks, marks and handballs. Whitnall took 11 marks, had 17 kicks and gave 11 handballs. 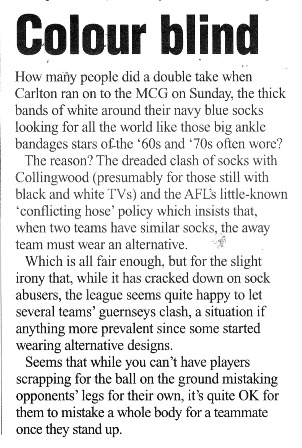