Carlton holds off Sydney by 1 point in a thriller at Princes Park.

Whether it was the role of Mark Bayes who would tend to have the wood over Stephen Kernahan, or a relaxed team given a game against the clear bottom team in the Swans, the Blues didn’t get going in this final round match of 1993. Carlton were lucky to come away with the points, after scraping home by a solitary behind.

Carlton looked in the clear at half time, but the Swans continued to play with pride. Rohan Welsh kicked the winning point after the Swans had fought back from a 26 point halftime deficit to hit the front deep in the last quarter. Carlton scrambled to level the scores and then Welsh kicked the deciding point right on the siren following a Sydney error in defence.

If we had lost, it would have been one of the biggest upsets in history, considering the stakes.

Our main avenues to goal, Kernahan and Brent Heaver, appeared well held, and we had to rely on the midfield grunt of Fraser Brown and Greg Williams, with the 1 vote for the day, to bring us home. 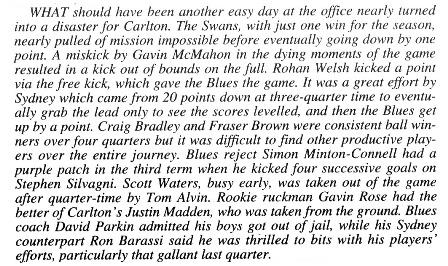