Another bleak day for the Blues - beaten by wooden-spooners Essendon at the MCG.

How does one describe the emptiness and despair of such an awful loss as this? How could Carlton - in winning form - be totally out-played by a second-string Essendon team languishing at the foot of the ladder? In this last game of the season, when a number of individual players’ careers hung in the balance, why did so many go missing? These were just some of the burning questions being asked on this Saturday afternoon, as the Blues trudged off the MCG in disgrace after one of the club’s worst-ever defeats.

In the lead-up to this clash, Carlton had been buoyed by a good win over Melbourne the previous week, as well as the opportunity to celebrate Dale Thomas’ 200th career game. The Blues made two changes - losing Ed Curnow to a knee injury, and omitting Andrejs Everitt - for Sam Kerridge and Jack Silvagni. In front of a moderate crowd of 45,000 on a fine, cool Melbourne afternoon, Kade Simpson won the toss, and the Blues started impressively.

Inside the first five minutes, Dennis Armfield marked and goaled from right on the 50-metre line, then Matthew Wright cleverly skidded through another from a near-impossible angle in the left forward pocket. But as the quarter progressed, the Bombers found cohesion, and began to get right on top around the clearances. Tackling hard, playing efficient, daring football and aided by Carlton’s erratic shooting for goal, they nosed in front at quarter-time and just got better as the game progressed. 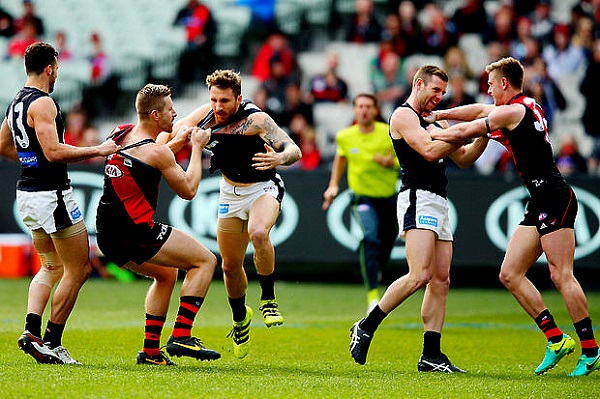 Essendon dominated the early part of the second term, and with their spearhead Joe Daniher creating all sorts of problems for Sam Rowe, they kicked their sixth unanswered goal to lead by 32 points. Carlton’s leaders; Kade Simpson, Pat Cripps, Bryce Gibbs, Matthew Kreuzer and Sam Docherty – with support from Matthew Wright and Dylan Buckley – were winning their share of possessions, but too many Blues just couldn’t get into the game and the Bombers were smelling blood. Midway through the quarter, a couple of contentious umpiring decisions went Essendon’s way, and their confidence grew. Kerridge laid a terrific tackle on Bomber captain Brendon Goddard and goaled from the subsequent free-kick, but Daniher replied with his third for the quarter and stretched Essendon’s advantage back out to 19 points at half-time.

The contest broke open in the third term, as the Bombers’ midfield ascendancy allowed Daniher and lively Tiwi Islander Anthony McDonald-Tipungwuti to carve their way through a disorganised Carlton defence. Clangers galore, and continued jitters in front of goal saw Carlton add 1.4 to Essendon’s 4.2 for the term, blowing the deficit out to 47 points at the last change.Struggling to retain his composure, Carlton coach Brendon Bolton demanded something more from his team in the last 30 minutes of their season. Some responded, but too many didn’t, and on the final siren the red and black hordes revelled in their third win of the season by 24 points. The cohesion in defence that had been the hallmark of Carlton’s season prior to this game had collapsed, and the Bombers had opened the Blues up like a can of sardines.

In a game all but devoid of highlights for Carlton’s supporter base, Pat Cripps and Kade Simpson stood out like beacons. Under intense pressure, Cripps won 32 disposals (23 contested) 10 clearances and 8 tackles, while “Slimmo” finished off his prolific season with 35 disposals and 7 marks across half-back. Gibbs, Docherty, Buckley and Zach Tuohy persisted, while Matthew Wright was the Blues only effective forward for four quarters and kicked three goals. However, the most damning statistic to come out of this game was that five Blues – as well as both ruckmen – all had no more than 10 effective disposals each in 100 minutes of football.