When great rivals meet, it can be expected that a tremendous battle will ensue and this encounter with Richmond, so often Carlton’s nemesis, was no exception. While not a great exhibition of skilled football, it was nevertheless a fierce, bone shaking, relentless clash of two great sides. The Blues were the better side for most of the day, winning in ground play, across the centre and in the ruck and deserved the hard fought nine point victory, in a match where players from both sides were left exhausted at the finish.

Norman Le Brun was the only omission to the side announced on Thursday night. Harold Maskell came into the team for his first game of the year. Jim Park was 19th man. Le Brun was supposed to be 19th man but arrived at the ground too late after his car broke down, and so Park took his place on the bench.

Celebrating his 27th birthday, skipper Charlie Davey won the toss and kicked to the grandstand goal. From the opening bounce, it became obvious that this would be a very physical game, with weight being thrown around freely. Both defences were on top early, making life difficult for the forwards; Huxtable and Gill prominent in defensive play. Carlton were the first to score, with behinds to Cooper and Dougherty after good team play. Into attack, Richmond was able to swoop on a deflected pass from Gill to score the opening goal. Carlton answered with a powerful hit-out from Dougherty which found Hale. He passed to Davey who kicked truly. Then Shea, with dazzling pace from the centre, passed beautifully to Hale who again found Davey in the goal square for goal number two. Hale had started on a half forward flank and was already creating headaches for the Richmond defence. He was in the play again shortly after, marking a nice pass from Shea and kicking the third goal from a set shot. The Blues were the better side at this stage. Changing their tactics, Richmond started using the southern side of the ground, which yielded results. Three good goals in quick succession gave them the lead. Playing a captain’s game, Davey started to dominate the ruck duels, allowing Shea, Hale and Clarke to start attacks in a great display of spectacular football. First, Hale burst away from his opponent, eluded a tackle and goaled from the pocket with a nice drop kick. Then Crisp assisted Clarke to score a great goal. Finally, Hale, brilliant again, broke clear and passed to Crisp for Carlton’s sixth goal. A fine quarter saw the Blues 14 points up at quarter time.

The second quarter was dominated by the defenders again. Richmond attacked fiercely in a series of thrusts at goal but Gill, with some brilliant marking, prevented scores time after time. Richmond’s forwards were making the mistake of bunching up and crowding each other, allowing Carlton to harass and spoil. Richmond had started playing the man instead of the ball but the Blues were standing up well. Tempers flared when Gill was heavily felled and had to be assisted from the ground. His place was taken by Park. The game had disintegrated into some fiery and rugged clashes. It was late in the quarter before Richmond scored the first goal. Soon after, Shea and Cooper, dogged in attack, assisted Crisp to goal with a clever snap, retaining the lead. After a torrid quarter, Carlton lead by 18 points at the long break. Hale’s first half had been outstanding and he was cheered off the field by Carlton supporters. The Blues were on top all over; Richmond winning only in the air. Huxtable, Davey and Gill had also had noticeable halves.

It was a case of business as usual after the break, with the rough play continuing. Both teams were fumbling badly, making for a poor spectacle. Richmond opened the scoring after Shea kicked into the man on the mark, allowing the Tigers in for their sixth goal. Huxtable, Gilby and Francis were almost impassable in defence, stopping many attacks but also creating forward thrusts. Good play from Turner on the wing saw the ball get to Cooper, who combined with Hale to kick to Clarke. He registered the eighth goal. Dougherty, with great dash, kicked at goal, but the ball was touched just as it went through. On the rebound, Richmond goaled to inch closer, but clever, sharp play featuring Shea, Crisp and Cashman resulted in an answering goal to Cooper. Huxtable repelled another Richmond attack. His game had also been outstanding. Carlton was winning well in the centre and Crisp passed to Clarke for a great running goal. The Tigers looked in disarray, with their teamwork lacking. Into attack again, Hale was felled and should have received a free kick. A series of late attacks yielded only behinds and the 24 point lead at the last break should have been greater, given Carlton’s dominance in the quarter.

The expected Richmond fightback came early in the last term. A long shot at goal hit the post, and then a series of passes resulted in the eighth goal. Richmond was winning in the air and had rallied. Another goal came from some fine play. De Luca was moved into defence and Park turned two attacks with lovely, high marks. A promising move started by Davey, Shea and Green was stopped by Richmond and a long shot at their goal was just touched by a running Gilby. While still very rugged, it had become a fast, thrilling game, with supporters on tenterhooks. Sensing victory, Richmond was applying enormous pressure and the Carlton defence was under siege. Attacking again, Richmond goaled to make the difference only three points at the 24 minute mark of the quarter. Carlton had not scored so far while Richmond had added 3-3. Another Richmond attack was stopped by Davey, with a safe mark. Carlton finally went forward, attacking brilliantly through Crisp, Francis and Hale which gave Dougherty the opportunity to mark and goal and make the lead nine points. Gilby and Anderson started another attack and the bell rang with the Blues just out of kicking range, ending a great game.

The Carlton captain Charlie Davey and the coach Frank Maher had strongly argued with the selection committee on Thursday night for the youngster Jack Hale to be included in the team as a half forward flanker and not on the half back flank.

"Charlie Davey, captain of Carlton, will long remember Saturday. It was the 26th. anniversary of his birth, and he led Carlton to victory over the 1934 premiership team, in a match marked by exceptional vigour, and played before a crowd of 35,000. Davey's health was drunk in the club rooms after the game. Gill the teams full back, was giving a grand exhibition of marking until he was obliged to leave the field in the second quarter. Two of his teeth were loosened and his lip was split on both sides of his mouth. Six stitches were inserted into the wound, and Gill is likely to be missing from two or three matches.

Two old Carlton champions "Mallee" Johnson and Doug Gillespie were recieved enthusiastically in the club rooms, where the president (Mr. D. H. Crone) entertained a large number of visitors. These inclluded the Attorney General (Mr. Bussau), the chairman of the Tramways Board (Mr. Cameron), Mr. Smith M.L.C., and Messrs. Jewel and Barry M.L.A.'s. Mr. Crone remarked that Councillor Frank Beaurepaire had sent the club two Olympic siver medals inscribed with the Carlton motto "Mens sana in corpore sano". It was decided to present the trophies to Huxtable and Hale for their fine displays that afternoon. Mr. Crone said he wanted the players to keep in mind always the club's motto." (The Argus)

Gordon Mackie and Harry Vallence have asked for clearances. Mackie to St.Kilda where his brother plays, and Vallence to North Melbourne. (The Age)

At the end of this round Carlton were in 4th spot on the ladder with a percentage of 122.9. 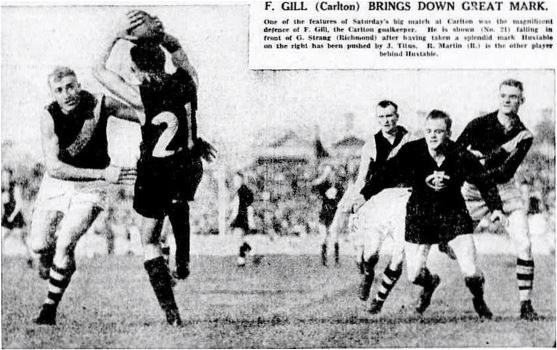 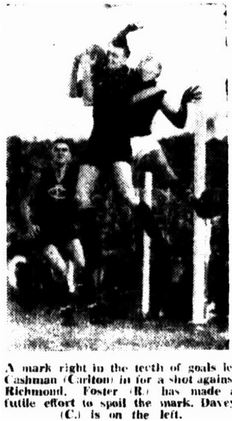 Images: Trove; Top; Age May 13, others Sporting Globe May 11