Carlton was made to work hard for this victory against an inspired Hawthorn at Glenferrie Oval. Had they kicked straighter, the Mayblooms might have recorded their first ever win against the Blues. But Carlton was steadier when it needed to be and won by ten points in a thriller.

Coach Frank Maher considered that the players were in top form and so held just a regular training session at Thursday night’s training session. Two changes were made: Ted Pollock came in for George Dougherty, and Bert Butler was made 19th man at the expense of Clen Denning. Soapy Vallence (bruised face) and Mocha Johnson (shoulder) trained well and retained their spots in the side. Of Vallence, the Age reported that he was a renewed player since Maher took over. His pace and marking had returned to that of his early career.

Both sides were into attack early, with promising moves stopped by opposition defenders. Carlton was first to goal, when Clarke brought the ball around the wing and Shea and McLean helped Johnson to shoot correctly at an unguarded goal for full points. Hawthorn was very fast, showing excellent teamwork and kicking and had the Blues’ defenders under the pump for the next 15 minutes. It was all Hawthorn, but after their first two goals, their accuracy left them and poor kicking at goal cost them dearly. They kicked five behinds in a row to leave them 11 points up, ex- Blue Jack Green being particularly astray. As expected, Carlton steadied, and after Johnson and Pollock were sent into the ruck, Shea helped Johnson race through half forward for his second goal. Cooper, playing well, scored a behind and then set Davey up on the railway side for a lovely angled goal. Cooper was into action again moments later with a goal of his own, Carlton’s fourth. Hawthorn missed another two late chances to leave the Blues up by seven points after a strenuously fought quarter. Hawthorn had been the better side, winning on the wings and in general play and their pace had the Blues worried.

Carlton increased its lead early, after Crisp and Gilby combined for Clarke to goal with a perfect drop kick. Hawthorn replied straight away, with former Carlton player Alby De Luca coming around the wing for a great goal. The pace was a cracker, with both sides giving a fine display of football. Defences were tight, making scoring opportunities scarce. Mackie, at centre half back was a standout, forcing the Mayblooms around the flanks. By contrast, Vallence was being well held, with no kicks to this stage. Hawthorn was winning in the ruck, with Carlton using weight freely. Shea, dominant in the centre, had two attacks repulsed, but streaked away on his third try and just missed goaling. Rebounding well, Hawthorn, with great pace, opened the Carlton defence and goaled well. It was goal for goal when Carney, with a great one handed mark, passed to Davey. He forwarded to Vallence, who with his first kick, set up Collard for a running goal. But the answer came promptly with a chain of passes giving Hawthorn their fifth goal. Johnson and Clarke gave Davey a chance, but the big man’s shot just missed. Again, Hawthorn attacked and brought the ball the length of the ground for a behind; the kick at goal undoing some great play. The Mayblooms persisted and got their sixth goal, with a ball that just bounced through for a four point lead. Undaunted, Davey marked and passed to Johnson, who scored his third and Carlton’s seventh with a penetrating stab kick. Attacking until the bell, Cooper and Johnson scored behinds to give Carlton a four point lead at half time. It had been a magnificent first half with the standard of play very high. Cooper, Shea, Mackie and Johnson were the Blues’ best for the half.

Maher made two important changes after the break; Crisp moving to full forward and Vallence to the half forward flank to try to bring him into the game. Carlton extended its lead after Mackie stopped a promising Hawthorn thrust. From his work, Hale kicked long into the forward line, where an unguarded Crisp passed to Cooper for an easy goal. The Blues went forward again, only for Hawthorn to rebound and kick their seventh goal. Another goal for goal tussle now commenced. Shea, Pollock and Carney combined to send Carlton into attack, where Cooper assisted Crisp to a clever snap goal. Again the Mayblooms answered and brought the ball around the wings for a great goal, to keep their deficit to only four points. It was still a fast game, with both sides desperate for the ball, but Carlton was the steadier, more methodical side, on top in ground play, with Hawthorn’s pace and determination keeping them well in the game. Another thrust forward by Carlton resulted in Vallence taking a great mark and goaling with a 50 yard punt kick. Undaunted, Hawthorn maintained their attacks, and two spectacular attacks resulted in two goals and a one point lead, despite desperate defence from Mackie and Gilby. Crisp levelled the scores with a behind before more Hawthorn attacks put enormous strain on Carlton’s backline. Enter the brilliant Shea. Turning defence into attack, he passed to Cooper who kicked a great goal. The pressure had been relieved and in three minutes, Carlton scored three goals; Cooper’s, Vallence on the run, and Johnson with a magnificent 65 yard angled drop kick to give a handy lead of 20 points at three quarter time.

The final quarter promised to be a thriller. The Blues kept the pressure up and after Hawthorn stopped an early attack, Clarke scored a behind. Then Shea and Pollock worked the ball forward forward and found Vallence, who marked and goaled for a 27 point lead. Hawthorn kept persisting, but two attacks gave only two behinds; one hitting the post and the other just missing. Attacking again, Park was caught with the ball and the free brought up Hawthorn’s eleventh goal, to get with 17 points at the 15 minute mark. Steadying the ship, Cooper, excellent all day, marked and found Clarke who goaled from the fringe of a pack. Carlton pressed again and when a Hawthorn defender slipped at the wrong moment, the ball went to Vallence, who scored his fourth goal. The game now appeared to be safe, but the home side were not giving up, and swept forward in a series of attacks. The Blue defence was battling courageously under great pressure as Hawthorn rattled on three goals in as many minutes. Two behinds were also scored to bring the Mayblooms to within ten points, but it was goals that were needed. Time was Hawthorn’s enemy, but the attacks persisted, with Mackie, Gilby and Park each repelling attacks late in the game. But it was enough. The bell rang with Carlton ten point victors at the end of a great game.

At the end of this round Carlton were in 2nd spot on the ladder with a percentage of 182.8. 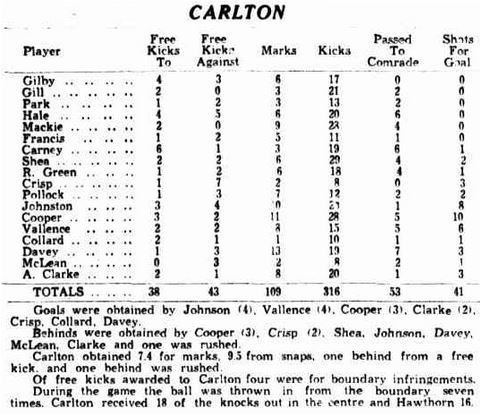