Carlton was hammered by the Gold Coast Suns at Carrara, but Jacob Weitering was superb in just his third game.

Carlton was well-beaten in this Saturday night encounter on the Gold Coast, and for the fourth year in succession remained winless after three rounds. However, Blues fans will remember this game for a long time, because of the outstanding efforts of 18 year-old defender Jacob Weitering. In just his third senior game, Weitering showed a maturity and poise and beyond his years, racking up nine strong marks and 26 disposals (at 81% efficiency) as his team was hammered by 54 points.

Ahead of this game, the Blues made three changes to the side beaten by Sydney in round 2, bringing back Dylan Buckley, Ciaran Byrne and Mark Whiley to replace Andrejs Everitt, Simon White and Jed Lamb. Although Carlton’s winning record at Carrara was good, the unbeaten Suns were in ominous early-season form, having accounted for Fremantle in clinical fashion the previous weekend at Subiaco. 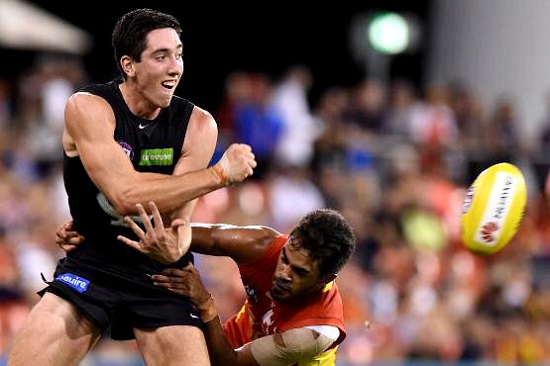 In front of a surprisingly sparse crowd of less than 14,000 on a warm and humid evening, the first quarter was highlighted by Buckley’s bursting run off half-back, and his long kick to Charlie Curnow on the lead. Charlie plucked a clever one-handed mark, then kicked truly from 30 metres to open Carlton’s account. Meanwhile, older brother Ed Curnow was burrowing into the packs to win six contested possessions in the first 12 minutes. When Levi Casboult missed with a set shot from 20 metres – after a strong contested mark – it was a portent of things to come, although Carlton was well in the contest at quarter-time, trailing by 11 points.

Early in the second term, Casboult marked again and goaled from close range, then a Gold Coast runner strayed too close to the play, costing the Suns a free-kick and a 50-metre penalty. Zach Tuohy took the shot and kicked truly to bring the Blues to within a kick, but that was to be as close as Carlton got for the rest of the night. From then on, the Suns’ tall forwards – particularly Tom Lynch – took advantage of the Suns’ midfield superiority and got right on top. Although Carlton’s ruckmen Matthew Kreuzer and Andrew Phillips were winning their share of the ruck duels, the Blues’ crumbers couldn’t find any time or space. At the long break, the Suns were ahead by 14 points and it should have been more.

In the third quarter, Pat Cripps broke free of his tagger and began to impose himself at the stoppages. His long bomb from the 50-metre arc cut the deficit to 16 points midway through the term, before the Suns rallied and added two late majors to skip away again by 26 points at three-quarter time. Had it not been for the calm efficiency of Weitering - who, time after time, chopped off Gold Coast forward thrusts with uncanny anticipation, the game would have already been over. But with support from the dogged duo of Tuohy and Sam Docherty, Weitering was defiant.

Even so, Carlton’s faint hopes of a late revival were snuffed out in the first few minutes of the last quarter, when the Suns locked the football in their forward half and finished all over their tiring opponents. Lynch took a succession of strong marks and could have – indeed should have - added another five goals to his tally, instead of 2.2 and a poster. The Suns kicked 4.6 to Carlton’s 0.3 for the term to run out emphatic winners by nine goals, and climb to second on the ladder behind Sydney.

In contrast, Carlton dropped to second-last on the ladder behind the surprisingly winless Fremantle, with Brisbane last on percentage. On a night when the Blues were beaten in all key positions and looked alarmingly impotent in attack, only Weitering, Ed Curnow, Docherty and Tuohy stood out. This outcome wasn’t unexpected, but another bleak season was unfolding.

Rising Stars: Jacob Weitering
Losing Margins : This was Carlton's biggest (of two) losing margins to the relatively new Suns
Interesting Fact : (1) Kade Simpson broke the record for the most games by a Carlton draftee, previously held by Andrew McKay at 244 games
Interesting Fact : (2) Carlton's score of 5.11 (41) set a new record as the lowest score ever conceded by Gold Coast in its five-year history in the AFL