A stunning debut by Clen Denning, a late inclusion in the side. He had 4 goals up at quarter time and went on to finish with 6.

In a very high standard and fair game, South Melbourne’s great third quarter was the difference between the two sides. Carlton had been superb in the first half, but South gained the lead by the last change and held on in a tense and exciting finish to win by seven points.

Carlton was unable to play Frank Gill, whose lacerated mouth had not healed, and Jim Francis, out with his dislocated thumb. Harold Maskell and Jack Cashman were omitted. Soapy Vallence, Gordon Mackie, Frank Dunn and Norm Le Brun (19th man) were brought in. Prior to the game, George Dougherty was ruled out with a knee issue and Clen Denning, recruited from Oakleigh, was the late inclusion for his first game.

The game was played in glorious weather, with practically no wind. South Melbourne attacked first but Shea intercepted and sent the ball into attack for Carlton. South relieved with a poor kick-in which was sharked by Clarke for the first goal. The Bloods mounted a strong attack but the shot went wide. However, they went forward again, and Anderson marked strongly in the goal mouth. His kick out went to Mackie, who was caught with the ball and South goaled from the resulting free kick. Carlton now mounted a series of almost continuous attacks, scoring three goals. First, Denning scouted a pack well and snapped Carlton’s second, and his first goal. Next, Cooper passed to Vallence for a nice goal. And finally, Denning eluded a defender to score the fourth goal. Another attack by Clarke went to Mutimer, but South defended well and went forward. Park repelled the thrust but a fumble by Carlton let South in for their second. South now rallied and mounted more attacks, goaling twice. Both sides were showing great skills and the game was being played at a fast pace. Play was rough but fair, with both sides making the ball, and not the man, their target. Carlton kept attacking and Clarke and Turner, both prominent players so far in the game, set up a chain of passes, allowing Denning to kick his third goal. Late in the term, Cooper kicked to Shea, who was paid a doubtful mark. He passed to Denning who marked well and kicked his fourth for the quarter to put the Blues up by eight points at quarter time.

After a minute’s play, Vallence marked and kicked Carlton’s seventh goal. Carlton were now unstoppable, playing some brilliant football in the first ten minutes. Shea, very good in the centre, went forward with a running drop kick at goal and Clarke picked up and snapped another. A further goal came when Cooper kicked to Green who miskicked and sent the ball wide. Denning marked it on the boundary and goaled from a set shot on a tight angle. Honours were with Carlton, playing almost perfect football. Desperate to stop the flow, South rallied and goaled to stay in the game. The pace slowed up late in the term with some heavy clashes occurring. Attacking again, South hit the post and the bell for half time stopped one last attack. In their desire for scores, South forwards were crowding and not working cohesively. Carlton led by 17 points at the half time interval. Shea, dominating the middle, Cooper, seemingly everywhere, Denning, five kicks for five goals, Huxtable, pacy and sure in defence, and Dunn were all noticeable players in the first half.

The third quarter marked South Melbourne’s comeback. An early shot at goal hit the post before a soaring mark resulted in their sixth goal. Carlton replied; Clarke sent the ball forward and Vallence, with great play, skirted around several defenders and goaled with a long punt. Carlton led by 22 points at this stage. Then came the great recovery. The next four goals went to South, with some brilliant football going with them; South’s midfield and rucks doing very well. Carlton defenders were rattled from the onslaught, but De Luca and Huxtable were doing all they could. The game was being played at a very fast pace. A goal to Carlton came when clever work from Crisp, in a pack, saw the ball spill to Denning who snapped his sixth (from six kicks). But a miskick from Cooper resulted in another South attack and their sixth for the quarter was scored. It had been the Bloods’ term and they deserved their eleven point lead at the last break.

Both sides made some changes at the break. Carlton switched Hale, who had been well held to date, and Crisp over on the half forward line. South Melbourne went 23 points up when they scored the first two goals of the quarter. But Carlton wasn’t done with and for the rest of the game played all over South. After a Huxtable and Green attack was fended off by South, Green and Shea combined well for Mutimer to mark and kick goal number twelve from an angle. South now went forward but was penalised for running too far. Carlton, with determined play, sent the ball forward and Vallence was involved in two scores. His first shot hit the post and then, after a great mark, he scored his fourth goal to bring the scores closer. The crowd was buzzing with excitement, cheering their sides on. With only a minute to play, Crisp snapped blindly at goal and watched the ball leisurely roll between the posts, as South defenders tried in vain to stop it. There were only six points the difference and Carlton was swamping the Bloods. From the centre bounce, South cleared and scored a single from a long kick at goal and when the bell sounded had won a great game by seven points.

At the end of this round Carlton were in 6th spot on the ladder with a percentage of 114.1. 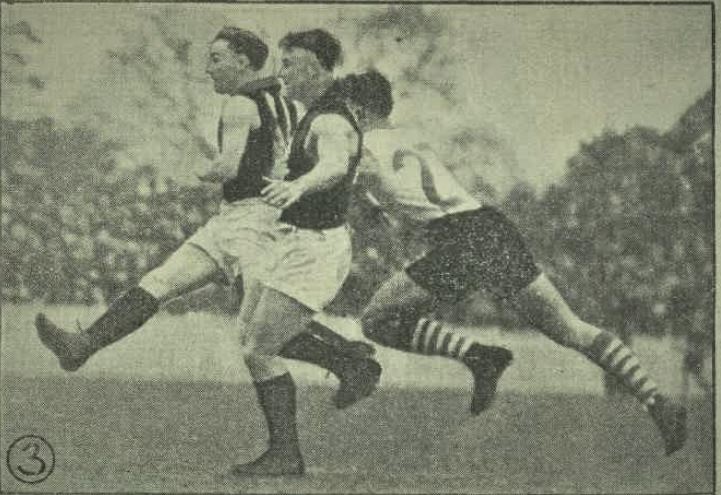 Blues' debutant Clen Denning kicking one of his six goals from his first six kicks.
84 years on and he still holds the record. Tackling Denning is South's No. 27 Allan Welch.
Ansell Clarke? closest to the camera. 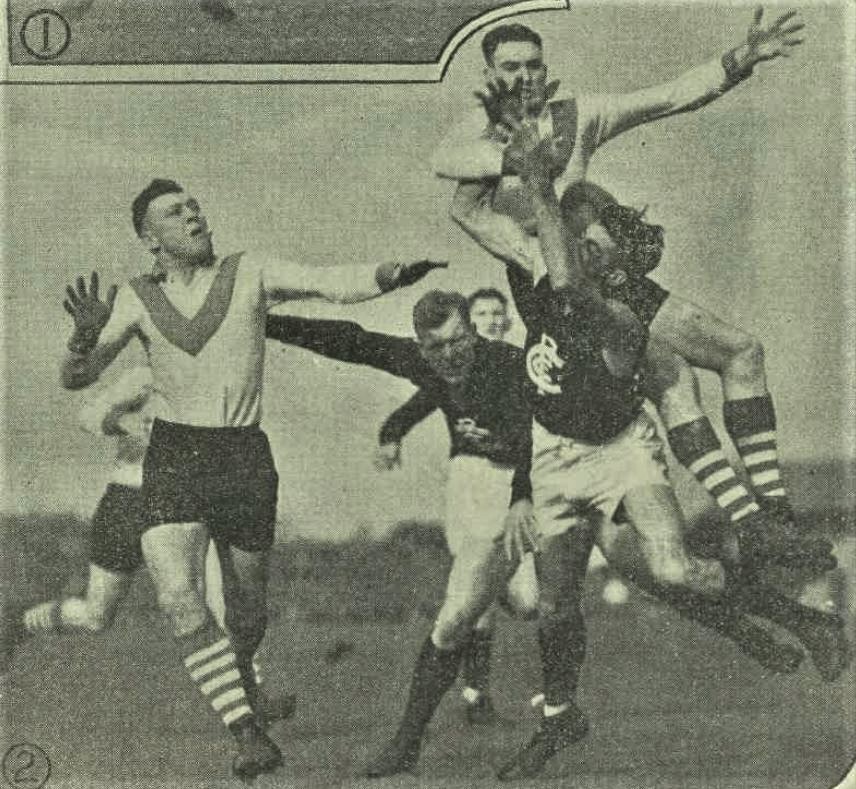 Gordon Mackie's marking attempt is spoilt by Roy Moore (SM). Jim Park is centre and South's champ Laurie Nash is on the left. Possibly Frank Anderson is at the rear 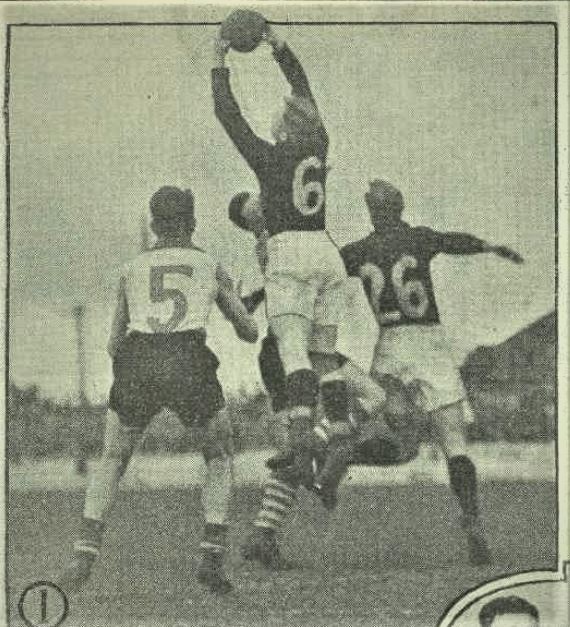