Carlton lost to Melbourne by 6 points at the MCG.

Dreadful inaccuracy around the goals cost the Blues dearly in this battle for a place in the top four. Despite having nine more scoring shots than the Redlegs, Carlton lost by a goal, and third place went begging.

The red - legged combination downed Carlton, but it was due principally to straight shooting. In the firing line the Blues were bad; their powder was damped probably. At any rate, they missed repeatedly, and their 5 goals had a tail of 14 behinds. Melbourne's looked more like a Manx cat—it had very little tail—and 8 goals with 2 behinds was as good scoring as anybody could wish to see. The two concluding quarters of the Melbourne and Carlton match were hotly contested, hard knocks being pretty frequent. Free kicks were as a consequence plentiful.

Carlton made a desperate effort to retrieve themselves in the final quarter, and literally ploughed their way through the crushes. Some faulty shooting for goal, however, minimized the prodigious efforts of the men 'midfield.

Melbourne played a fine strong game throughout, and, getting a run on the dark blues in the third term, took a commanding lead, which they maintained to the end.

At the end of this round Carlton were in 6th spot on the ladder with a percentage of 120.3. 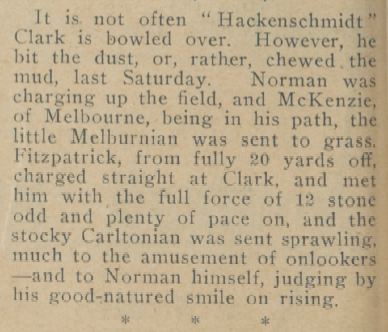