Carlton defeat Fremantle by 8 points at Subiaco. Judd held all night - literally by the arm.

The harsh reality check that was Round 4 had been dealt with, digested and moved on from, so Carlton's attention turned to the long trip west to meet the Dockers and attempt some form of redemption. With Ross Lyon at the helm Fremantle seem to have a harder defensive edge and it remained to be seen whether he would employ the same clogging tactics Essendon had used so successfully against Carlton. Despite Carlton's poor form, numerous injuries and Fremantle's win away from home the Blues still held favouritism with the bookmakers in the lead up, though much of the focus was on the impending birth of Brett Ratten's third child which was imminent.

Not only was round five a train-wreck on the scoreboard there were numerous physical casualties too. The nasty ones were Andrew Carrazzo and Jeremy Laidler both set to miss anywhere between 8-12 weeks depending on who you believe with shoulder and knee injuries respectively. Chris Yarran also missed with a sore toe, whilst Paul Bower and Brock McLean both felt the axe. In came several familiar names including Jordan Russell, Bret Thornton, Aaron Joseph, Dennis Armfield and Andrew Walker. Walker had been chomping at the bit for weeks, eager to play, and finally got his chance. 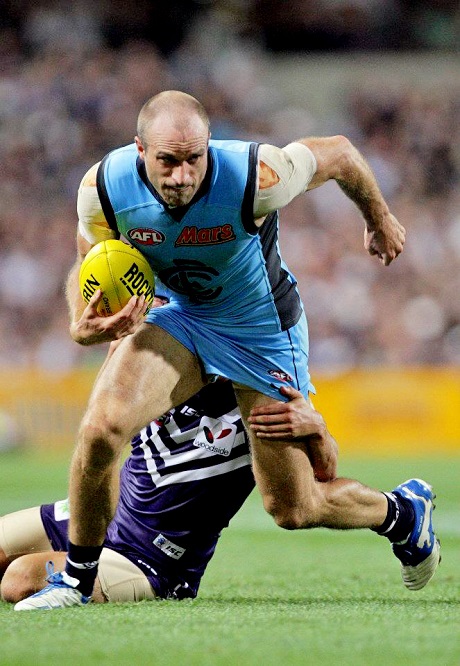 It was the sky Blues that trotted out onto Subiaco Oval in warm conditions to face Freo and it wasn't long before they were feeling the heat. The Dockers grabbed the opening goal after five minutes and definitely had the better of the early going. Chris Judd was being tightly marked by Ryan Crowley and was finding it difficult to get into the game, though Marc Murphy had once again started well in the midfield and Bryce Gibbs was settling in defensively, sweeping across half-back. The Blues finally got on the scoreboard when Mitch Robinson slammed through a behind in the 18th minute before Jeff Garlett got the Blues' first major shortly after, swooping on the crumbs from a long bomb that hit the top of square. With goals hard to come by Shaun Hampson's strong contested grab and beautifully finished follow up from just inside 50 was welcome as the game neared quarter time. His goal gave the Blues a narrow five point edge at the break.

If you attended Subi hoping for a free-flowing, high-scoring shoot-out you would have been sadly disappointed (and probably delusional in the first place). Hard fought, contested footy was the order of the day, with swarms of players following the ball and goals laboured over. Fremantle probably had the better of the early going during the second term, but their periods of dominance were stained with wasteful usage and inaccurate shots at goal. The Blues on the other hand never really got on top with any great significance but were efficient and accurate when they went forward. Freo got the lead back early but the Blues responded with two goals in two minutes to Jarrad Waite and Walker, who emphatically announced his return with a spectacular high-flying attempted mark which just failed to stick. Freo got one back but Eddie Betts answered quickly to extend the lead to seven points before Kade Simpson finished truly just before half-time. Simpson had been prolific with his accumulation of possession during the half but had squandered many of his disposals taking the tarnish off an otherwise solid half. Waite had the chance to send the Blues further clear just before the main break but his long bomb from straight in front hit the post to make Carlton's lead 11 points.

After half time the Blues came out and played their most dominant football for the match. A strong ten minute burst caught Freo on the back-foot and netted the Blues three goals. The first came quickly after the resumption when Garlett gathered a loose ball just inside 50, wheeled onto his right boot and snapped it around the corner for a wonderful goal. Robinson crumbed the pack beautifully and smashed through a goal from 40m for the second of the term and then Walker snagged his second after receiving the inboard handball from Simpson and finishing clinically to give the Blues their biggest lead of the game at 31 points. That was about as free-flowing as the game got it returning to arm-wrestle mode for the remainder of the term with Freo getting their only goal for the quarter in the final minute. At the break the margin was a seemingly comfortable 24 points.

Robinson's strong contested mark to open the term and the resulting goal looked as if it would give the Blues all the breathing space they needed with a five goal buffer but the goal was their one and only for the term. Freo struggled to make any initial inroads but in the 17th minute they started a mini-run that would give Carlton supporters everywhere heart palpitations. Three goals came in a flurry of activity at the Fremantle end, where there had been little previously throughout the night. When the third goal sailed through the margin had been reduced to a mere nine points with just under four minutes to play. The clock was Carlton's biggest ally and fortunately it wound down to zero with the Dockers only adding another point. A gritty away win by just eight points, but a much needed one for the Blues.