Collingwood defeated Carlton by 36 points at the MCG. 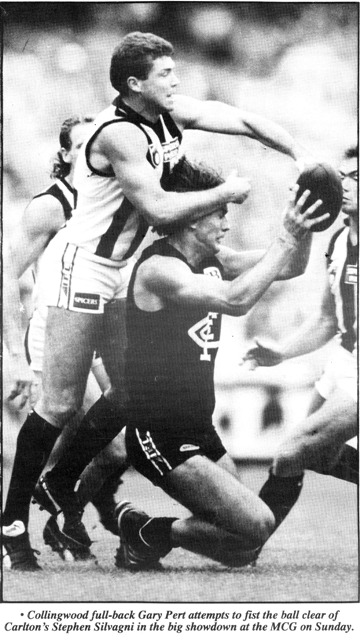 Carlton went down to the rampaging Pies by 6 goals in this huge game at the ‘G. The Pies would keep Spalding and Kernahan quiet, and dominate out of the middle to keep in touch with top spot – at this time they were one game away from North Melbourne.

The Blues would not poll a Brownlow vote, and early season leader Greg Williams was held to a relatively mild total of 25 possessions. Rocca would kick 6 for the Pies, and Mick McGuane would go a long way to committing the Blues to his transfer 4-5 years down the track with 4 goals and 20+ possessions. (This was not the game where McGuane – to become a Blues a few years later – took the ball out of the middle, bounced a billion times and slotted the goal through without us touching it - that was Round 2 1994).

1981 GF - Doull gets a clearing kick with McConville in support & Maylin in the background.