Carlton demolished Sydney by ten goals at Optus Oval. James Cook kicked 6 goals and was nominated as a Rising Star.

Sydney may have won the wooden spoon by a clear margin in 1993, and they were still bottom or nearabouts come Round 6 of 1994, but this nice old 10 goal thrashing at Princes Park was a beauty to watch for a Blues fan. We would absorb their efforts in the opening quarter, and then gradually pull further and further away to win our third game of the year.

The best bit was the players who were doing the pulling away. New forwards James Cook and Troy Bond would kick 11 goals between them in a promising display for the future of the Club. Many in the outer at Princes Park thought this would be the new future – we didn’t need Kernahan firing with these two guys coming through. History would prove that both Cook and Bond would be gone by the end of the next year, traded away for Ben Sexton and Adrian Hickmott respectively, but on this day they were Kings, Carlton Kings.

Fraser Brown was enjoying a huge 1994, and was grabbing the ball from packs as only ‘Dog’ could, in support of Ratten And Williams, whilst the trusty Craig Bradley had a standard outing of 27 stats and 1 goal.

There were some great names on the other side – can you remember Sanford Wheeler? Jayson Daniels? Darren Kappler? Or Damian Lang who would come to Carlton for a few games later on in his career? 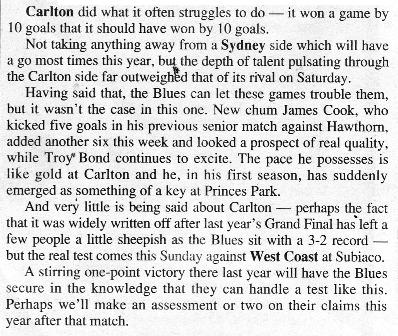