Two wins in a row for Bolton's Blues - home by 15 points over Essendon at the MCG.

In similar circumstances to the previous week, Carlton ground out their second win of the season with an ugly victory over Essendon on this Sunday afternoon at the MCG. In a mistake-riddled match that at times resembled paddock football, the Blues handled the conditions better than the Bombers and survived a last-quarter scare to win by 15 points. Victory came at a cost however, when boom recruit Jacob Weitering damaged his right shoulder in a heavy collision early in the second quarter. After lying motionless in the hands of Carlton’s trainers for some time, he was helped from the ground in obvious distress and took no further part in the match.

Weitering’s absence came on top of the late withdrawal of midfield weapon Patrick Cripps, who succumbed to a calf strain only an hour before the match. The Blues had already been forced into two changes to the side that conquered Fremantle, losing Dylan Buckley to a calf strain, and Charlie Curnow to illness. Dennis Armfield and Nick Graham were selected as their replacements, before Simon White was called up late to cover for Cripps. To honour recruit Matthew Wright’s 100th career game, the Blues were aiming to heap more pain on a traditional rival by shooting down the troubled Bombers, and most commentators were expecting that they would.

Heavy rain fell across Melbourne on the night before the match, and there was a strongly blustery breeze blowing diagonally across the ground toward the main scoreboard at the opening bounce. The first few minutes were a scramble, and the ball was locked in Carlton’s half of the ground before Dale Thomas snapped truly on his right foot to bring up the first goal of the game. Essendon replied when a long kick to a vacant forward 50 bounced through for full points. The next 20 minutes of hard, contested football saw both teams miss gettable chances through sloppy disposal and poor shooting for goal, and only Matthew Wright and Liam Jones kicked truly to give Carlton a 12-point break at quarter time. 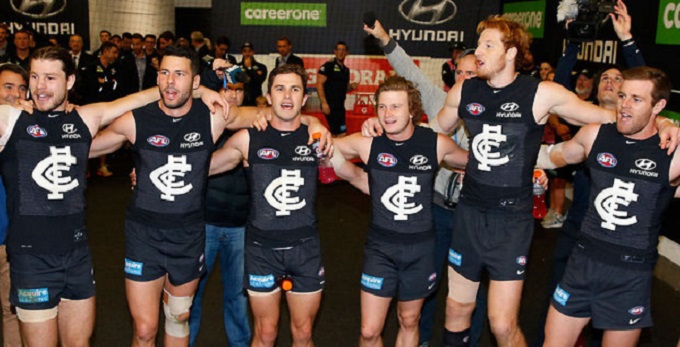 Minutes into the second term, Blues fans’ hearts sank when Weitering dived after the ball close to Essendon’s goal and a Bomber forward’s shin crashed into his head. Briefly out cold, and with his shoulder joint damaged, the Rising Star nominee was out of the game, leaving a sizeable hole in Carlton’s defence. The rest of the quarter was a stalemate, as both sides continued to miss targets and spray shots on goal. No majors were scored by either side, but the Blues tally of 0.6 to Essendon’s 0.3 increased Carlton’s lead to 17 points at the long break.

As the second half began, Carlton should have broken away to a decisive lead, only for regulation attempts at goal by Levi Casboult (twice) and Jones to spear off-line. As so often happens in those circumstances, Essendon rebounded and in ten minutes of dominance posted three unanswered goals. Suddenly, the margin was three points and Carlton were vulnerable – until Bryce Gibbs dodged out of a pack and snapped the goal of the day to inspire his team. Andrew Phillips stopped another spreading Essendon attack with a driving tackle, and at three-quarter time the Blues were clinging to a slender advantage of 7 points.

The last term was an absorbing contest between two anxious sides. Essendon struck first through their full-forward Joe Daniher, who had been well-held until his accurate snap brought the margin back to 2 points. Then Matthew Stokes should have put the Bombers in front from 30 metres, but missed. Carlton swept back into attack and, with Andrew Phillips rucking well, the Blues split the posts four times in succession through Marc Murphy, Dennis Armfield, Liam Sumner and Matthew Wright to lead by a game-high 26 points with 10 minutes to play. Essendon kept coming however, and three majors in quick succession put them back in the contest with only time-on remaining. Liam Jones should have kicked the sealer for the second week running, only to miss from 45 metres, before Phillips inflicted the coup de grace by driving the ball straight through the middle from the 50-metre arc right on the siren.

While this match won’t be remembered with great fondness by either side, the Blues won because they never lost focus, and despite repeated mistakes, stuck to their game plan. In another even performance, Dale Thomas (31 disposals, 6 marks, 7 tackles. 1 goal) and Bryce Gibbs (32 disposals, 10 clearances, 1 goal) were outstanding, along with Ed Curnow, Marc Murphy and Sam Kerridge. Matthew Kreuzer and Andrew Phillips were often out-reached by Bomber ruckman Matthew Leuenberger, but they were more effective around the ground. Sam Docherty and Zach Tuohy led a resolute defence, where Sam Rowe was credited with a remarkable 12 “one-percenters.”

Winning Streaks : This was the first time since Round 13, 2015 that the Blues had won two games in a row.
Goals Records: In this game, Dale Thomas equalled Ang Christou's record of 18 goals in Guernsey 39
Interesting Fact : For the second week in a row Carlton scored 10.12.72. Both scores resulted in victories, and both opposition coaches (Ross Lyon and John Worsfold) had formerly been on Carlton's coaching panel together under David Parkin