The Blues scored their third win on the trot and climbed to second on the ladder after this clinical victory over Melbourne at Waverley. Carlton's defence was impenetrable after half-time, while John Nicholls controlled the ruck to give his small men first use of the football all day.

Following their great win the previous week, Melbourne failed its supporter base dismally in this match - by suffering its second loss in a row at the hands of Carlton at the League's ground, VFL Park. They kicked 5.8, their lowest score against the Blues for 12 games, but Carlton, although they won well, only managed to kick their lowest score for nine games against Melbourne. - Football Record.

I was tremendously happy with the team's overall effort. This was the first time this season that we have played disciplined football of that type I want. It was a real team effort and a good game to win. - John Nicholls.

Carlton's Robert Walls took the highest number of marks - 17 - for the round. This was one more than the tally taken by his team-mate, rover Adrian Gallagher. - The Australian.

The Professionals ...led by the biggest pro of them all!
While St Kilda battle with their inconsistency and Hawthorn worry about Peter Hudson's knee, Carlton are forging steadily towards the five and well deserved favoritism for this year's flag. The Blues stand out as the professionals of League football this year. The biggest pro of them all of course is Carlton coach Big Nick. Nicholls directed traffic all day against the feeble Melbourne at VFL Park and occasionally took time out to chastise a few errant Carlton players, and umpire Smith at the same time. The state selectors could do a lot worse than to return Nicholls to Victorian captaincy. Meanwhile Melbourne will continue to have nuisance value only this season, without troubling the power teams. - Inside Football. 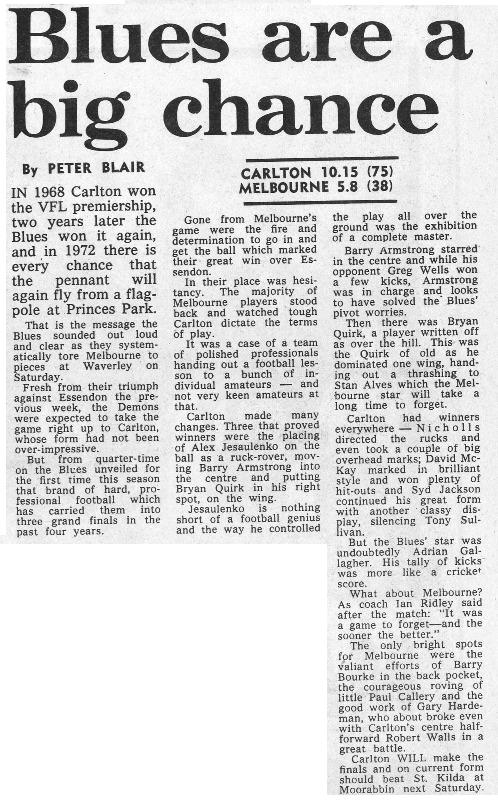