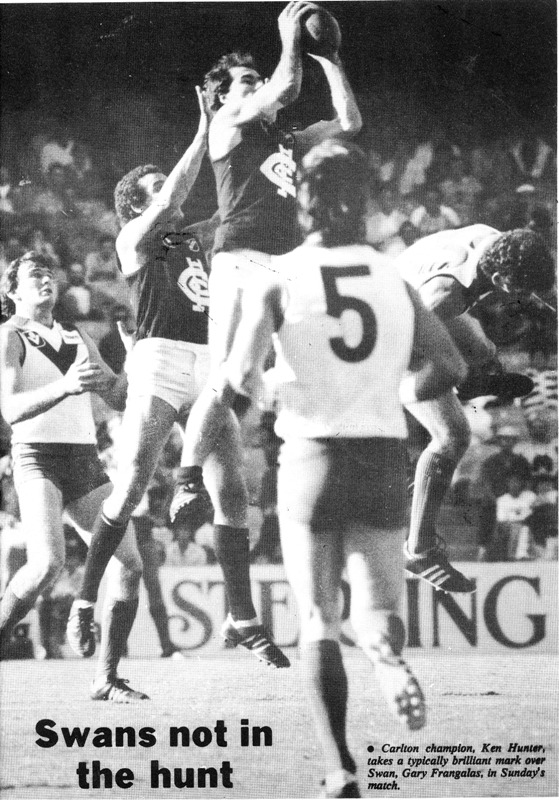 You can tell this game was a long time ago by 2 facts:

1) Madden debuted for Carlton and he scored 5 goals; and
2) Carlton won away at the SCG!

The Blues amassed 22 goals against the Swans, including a massive 13 goal 2nd quarter, to take the points. An unusual match insofar as the scoring rates were concerned, but for those who knew the SCG, not uncommon. This was perhaps due to it being the shortest, yet widest ground in the league.

Future Blue David Rhys-Jones would make the best players for Sydney, perhaps demonstrating his abilities to Carlton's recruiting staff. For more about Rhys-Jones' performances against the Blues, click here.

Now past the 100 game mark, Carlton utility player, Peter McConville was rewarded for his fine match against the Swans, with three votes. McConville roamed around the forward line and ended up with five goals in a consistent display. - Inside Football Player of the Year.

Carlton has the bargain of the decade in giant ruckman, Justin Madden, a match-winner against the Swans on Sunday. Madden not only will be a top player for the Blues for many years to come but the Blues won his services for a ridiculously low figure. You will remember, of course that the Blues snapped up Madden soon after the confusion created by the Foschini case. It now appears, however, that transfer fees are starting to creep back to their normal level, especially if last week's deal between Geelong and Essendon is any guide. I believe Geelong paid Essendon a handsome fee for winger, Alan Reid with $60,000 being mentioned. Reid should do well with the Cats but they, apparently, have paid just a little less than what it cost the Blues to snare Madden. - Jim Main Inside Football.

It's no coincidence that Carlton returned to the winning list on the weekend with captain, Mike Fitzpatrick, back in the side. Fitzy means a great deal to the Blues. He is an inspiring leader and brings other Carlton players into the game with constructive football. The Blues looked in a good deal of trouble at quarter time in their clash with the Swans in Sydney. They were six goals down and struggling to keep up with the slick Swans. But then, coach David Parkin swung Fitzy on to the ball and that made a giant difference. He dominated the centre bounces and continually gave the Blues first use of the ball. Carlton slammed on 13 goals in the second term and went on to win the game by five goals with Mike Fitzpatrick playing a major role in the victory. With Fitzy back in their line-up and in good form already, the Blues are a much more formidable side. No doubt, he's the key factor in Carlton's Premiership hat-trick aspirations. - Michael Roach Inside Football.

Speaking of Carlton big men...... New Blue, Justin Madden, made a fine debut with Carlton on Sunday. He kicked five goals, including three vital goals in that hectic last quarter. Carlton searched far and wide for suitable big man back-up for captain, Mike Fitzpatrick. The Blues were fortunate enough to secure the services of Justin Madden, who, during a brief career at Essendon earned a reputation as one of the best ruckman in the League. Justin's 6ft 9in frame proved too much for the Swans on Sunday - particularly in the final term when he took a couple of big marks near goal with those long arms of his easily outreaching the tired Swan defenders. He'll certainly be a valuable player for the Blues during the rest of this season and for years to come. - Michael Roach Inside Football