Carlton lose to Footscray by 28 points at Princes Park. 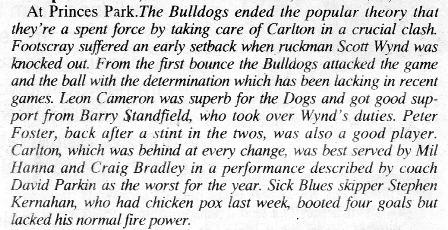 Despite the best efforts of Bradley with 30 possessions, Captain Kernahan with 4 goals and Mil Hanna at half-back, the Blues could not rise above ‘disappointing’ in this home loss to the Bulldogs. Whether I expected more than I should have, being my 18th birthday on the day, the Blues seemed to struggle through this period of indifferent form.

Perhaps the most memorable part of the game was memorable for the wrong reasons. A huge pack gathered outside of the Gardiner Stand at Princes Park, and at the end of the play, Bulldog Scott Wynd lay motionless on the ground. It seemed as though it took them half an hour to get the big Brownlow Medallist off the ground, and after the incident, the now quiet crowd and the injury to a key Dog seemed to subdue the Blues.

The game would be both the debut and final game of young Tasmanian Jeremy Smith, who would play the solitary game for the Blues. At least he would kick a goal, being one of 8 individual goalkickers for the game.

In a tight season, the Blues would fall out of the top 6 and back to 10th after this loss to the Doggies.