Carlton demolished Collingwood by 51 points in a one-sided match at the MCG.

On what is regarded as the 150th Anniversary of the ‘writing of the first rules of Australian football’ in a room at Jerry Bryant’s Hotel in Wellington Parade on May 17, 1859 - when William Hammerslay, James Thompson, Tom Wills and Tom Smith met and formulated these rules, the only two sides that have played in every season of the League met in their 238th match on the hallowed turf of the MCG. 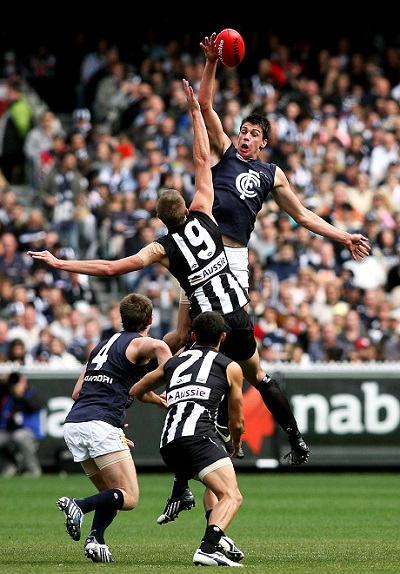 Sadly, the less said about the second quarter of this game, the better, as it was the poorest football by both sides for ages. Collingwood scored their first goal for the match at the 14 minute mark of the term from a free kick, and frankly the standard of play all round was not an endorsement of the game.

Of exception was the brilliance of Blues' captain Chris Judd whose entire performance was exceptional. Two kicks in particular, early in the game, both of which resulted in goals to Betts and Austin, just had to be seen to be believed. He even took a sensational pack mark in front of goal in the third quarter, and no doubt earned three Brownlow Medal votes.

A huge umpiring blunder occurred during the last term when Dayne Beams scored one of Collingwood’s goals. Carlton defender Bret Thornton was manhandled, grabbed around the neck and slung to the ground by Magpie John Anthony - right in front of the most respected field umpire in the League in Mathew James - and nothing was paid. But then again, an emphatic 51-point victory over Collingwood was all that mattered in the end, and the club song was once again sung with gusto.

Mark Austin brought up his first career goal when he sent the ball through the middle during the first quarter. Brendan Fevola held goalless, but assisted in several. One of his kicks during the third quarter was enormous, from near the boundary line on the MCC wing to the Punt Road end goal. After 172 games, Fev had scored a major in 150 of them. Of the 22 games in which he hadn't kicked a goal, Carlton had won only eight.

This crowd was the third biggest for the season, only 1,995 less than the ANZAC day clash between Essendon and Collingwood. Carlton's Round 1 match against Richmond was the largest, drawing 86,972 to the MCG.

Carlton sat sixth on the AFL ladder after this game, ahead of Hawthorn, Essendon and Sydney on percentage.