Carlton lost to Geelong by 1 point at Princes Park

A crowd thriller. Geelong looked the better side because it made fewer mistakes, won in the air, and had two champion rovers in Pianto and Trezise. The Blues lost the game in the first quarter with their fumbling of the ball and they failed to capitalise with the strong wind, scoring only 2 goals. The wind then died and that early advantage was lost. Carlton hit back and regained the lead a couple of times during the match.

"In a nerve tingling last quarter Geelong seemed to have the game well in hand when Carlton launched attack after attack, and made the leeway eight points. Then came a goal out of the pack by Laurie Kerr, and a behind by John Chick made the difference one point. Again Carlton stormed the attack, and the ball was in the forward zone once again when the siren sounded."

"I was pleased with the way we fought out this match, as we came back with plenty of pace and fighting spirit. We were beaten around the packs because we could not counter the roving of Peter Pianto and Neil Tresize. I thought we won well on the wings, but the loss of our full forward in the first quarter upset our side. Costly mistakes were made by our chaps, and Geelong had the happy knack of capitalising on those errors." 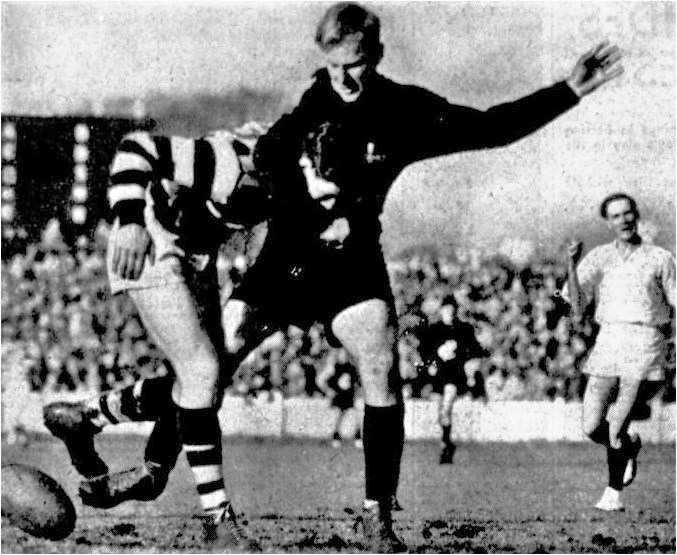 In front of the old scoreboard Ken Hands has a headlock on an unknown Geelong player, watched on by umpire Bill Barbour.
Possibly first quarter action as there are no other games' scores shown. - Age June 11
Round 8 | Round 10