Carlton had nine less scoring shots than Essendon, but still beat the Bombers by 1 point at Windy Hill.

A wildly-inaccurate Essendon had nine more shots at goal than Carlton in this game at Windy Hill, but still lost by 1 point. Peter Barry made his debut for Carlton as a late replacement for Bob Crowe who withdrew from the selected team because of an ankle injury. Barry impressed by kicking three goals in the first of his 77 games for the Blues, but would later become an accomplished full-back.

The Essendon forwards dominated the first half but as the saying goes, "bad kicking is bad football." The Carlton defence, led by Johnny James, Bruce Comben and George Ferry pressured their opponents and played well all day. The Dons were in front by 9 points at three-quarter time, but Carlton levelled the scores half way through the final term and the tension built. A few minutes before the final siren, a rushed behind by an Essendon defender gave the Blues the match. 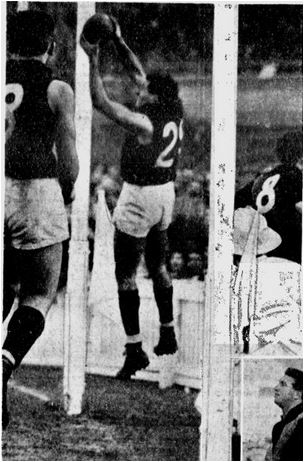 George Ferry saves the game with a mark on the goal line, late in the final term with the scores level.