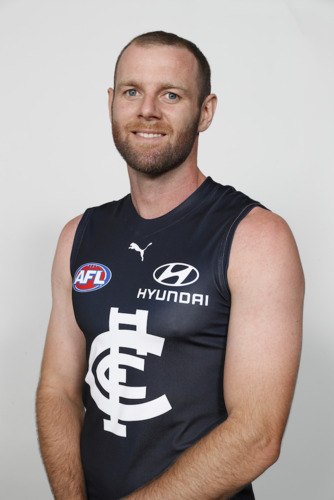 In the wake of Carlton’s inconsistent efforts during 2013, Blues coach Mick Malthouse vowed that the club would be active during the post-season trade period, and was true to his word. When the dust cleared after three weeks of intense negotiation in October of that year, the Blues had recruited former Collingwood Premiership star Dale Thomas, ex-Western Bulldogs and Sydney Swans utility Andrejs Everitt, and 20 year-old former Brisbane Lions midfielder Sam Docherty.

Docherty grew up supporting Carlton and dreamed of pulling on the navy blue jumper throughout his impressive junior career, until he was drafted by Brisbane from the Gippsland Power as an 18 year-old at number 12 in the 2011 National Draft. The Lions regarded him highly and he was honoured with their number 1 guernsey, although his first season was ruined by injury and he didn’t manage a senior game. In 2012 he dominated the early rounds of the NEAFL, and Brisbane called him up for his senior debut in round 4 against North Melbourne. From there Sam went on to play another 12 games – six as the Lions substitute. He racked up 27 possessions against GWS in round 21, but it was his 19 disposals and 9 marks against the Western Bulldogs a week later that made more than one good judge sit up and take notice.

Meanwhile, the Lions were sliding into chaos on and off the field. Having sacked their senior coach Michael Voss in August, the board was under fire from a number of fronts and facing the real probability of being tipped out of office at un upcoming Extraordinary General Meeting. In the circumstances, it wasn’t surprising that number of players from other states – Docherty amongst them - succumbed to a combination of home-sickness, frustration and insecurity and requested to be traded back home. Malthouse was known to rate the youngster highly, so the Blues wasted no time in approaching the Gabba hierarchy.

The talking dragged on for far too long, but eventually Docherty became a Blue in exchange for Carlton’s pick No.33 in the 2013 Draft. The deal was finalised just 48 hours before the deadline, and Sam was overjoyed to have been given the chance to achieve his boyhood dream. “I can't wait to put the jumper on, it's a dream come true," he said. “Obviously, growing up barracking for them, and now getting here – I can't think of anything better.” Indeed, his choice of guernsey number 15 provided all the inspiration he could have asked for, having been worn previously by a galaxy of Navy Blue stars including Ernie Jamieson, Bruce Comben, Phil Pinnell and Val Perovic.

When he was told that Docherty had found a new home at Princes Park, Gippsland Power regional manager Peter Francis (himself a former Carlton Premiership player) said that there was no doubt the Blues had picked up a bargain. “He’s a really good kid, and I think he’s a player that can go through the midfield. He has beautiful skills on both sides of the body, has really good hands, and he is a quality decision maker,’’ Francis said. “He was an early pick for the Lions and they will be disappointed in losing him, but the problem was that he is really close to his family at Phillip Island, so there was a big pull for him to come home.’’

Docherty had to bide his time in the VFL with the Northern Blues for the first six rounds of the 2014 season, before he was called up for his senior debut against Collingwood in a huge match on a Friday night at the MCG in early May. In front of a crowd of 68,000, Sam started from the interchange bench and impressed with his poise under pressure as the Blues went down by 24 points. He kicked his first two goals as a Blue in a hard-fought win over St Kilda on the following Monday night at Docklands, and from then on, played every game through to the end of a bleak season.

Everyone at Carlton was intent on redemption in 2015, but fate decreed otherwise and the Blues slipped even further to endure one of the clubs’ worst-ever seasons. By the time Malthouse was sacked in late May, his injury-ravaged team had lost seven of the first eight games of the year – many of them by big margins. Later, when the Blues suffered the humiliation of finishing last on the ladder for the fourth time in 13 years, a blowtorch was turned on everyone involved in the club – in particular the players.

By then only a handful of individuals were beyond reproach, and one of them was Sam Docherty. Week after dismal week, Sam’s single-minded grit set the standard in Carlton’s defence, where he averaged 21 disposals and 6 marks in his 19 games, and finished sixth in the voting for the John Nicholls Medal for the Blues' best and fairest player. Equally as significant, he signed a three-year contract extension during the darkest days of that awful season.

In 2016, Docherty was promoted to Carlton’s leadership group by his new coach Brendon Bolton and responded with another outstanding season. Although the Blues won only 7 games, Sam was a model of consistency across half-back, where his anticipation and dash proved decisive in each of those wins. In 22 matches, he lifted his averages to just under 26 disposals and 8 marks per game on the way to winning the John Nicholls Medal as the Blues' Best and Fairest, as well as Carlton's Most Improved Player Award. His coach was full of praise for the 22 year-old at the presentation, saying (in part); “He (Sam) is a really intelligent footballer, and has learnt to become almost an extension of the coaching panel out on the field this year. He has a clear hunger, and a drive to continually develop with every game he plays.” Docherty was rewarded for his fantastic season with selection in the AFLPA 22Under22 team in the back pocket position as well as being chosen in the squad of 40 for the All Australian team.

Docherty took his game to yet another level in 2017, finishing the home & away season with the highest overall tally of kicks, effective kicks, metres gained & marks in the AFL. His incredible season was rewarded with selection on the half back flank in the All Australian team, having made the squad the previous year.

Unfortunately Docherty sustained an ACL injury in the pre-season of 2018 which ruled him out for the entire season. Being the ultimate team person, Docherty took the opportunity to become heavily involved in the coaching team for 2018 including a strong presence in a match day role. He looked supremely fit for the 2019 season when after a month of hard work, his knee buckled again; tearing his ACL and breaking our hearts all over again.