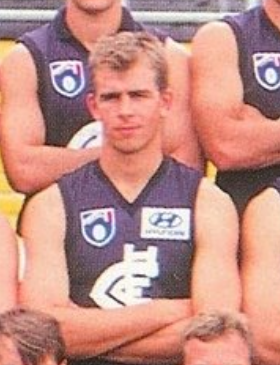 Taken at pick 38 in the 1996 National Draft, Smart created a bit of interest when drafted. The Club appeared pretty happy with their choice, and indicated to the press that the Kangaroos were also very interested in him.

A tall, lean, ruckman from Norwood, Smart was given the #25 but struggled over in Victoria. He was 200 cm, but the published 101kgs surprised all who saw him - his only area of meat seemed to be from his thighs which were always covered in thigh pads!

Despite good form in the reserves, Smart would ultimately only play the solitary game in the Carlton seniors, running out in the #25 (and thigh pads) in Round 21, 1997. Unfortuantely he failed to gain a statistic and was never selected again. He remained on the list in 1998, playing in the Reseves for the first 10 rounds but missing the remainder of the season with an ankle injury. He was last seen playing for North Ballarat in their 1999 VFL grand final defeat to Springvale.

Sam also played one 'night' game that was in Carlton's 1997 'Night' Premiership against Geelong at the MCG. His brother Doug Smart who played for Norwood in South Australia was drafted by Carlton in the 1986 National Draft, as a second round pick at number 25. He never came across, but later Brisbane picked him up as a pre-draft selection at number 11 in the 1989 National draft and he played a few reserve games for Brisbane in 1990.

He was also studying medicine at the time.

Kreuzer under pressure against Geelong..jpg