After the sensational suspension of three players, Carlton lost to South Melbourne by 12 points at the MCG.


Sensationally, Carlton suspended three senior players (Alex "Bongo" Lang, Doug Fraser and Doug Gillespie) with less than an hour to go before the start of this Semi Final. While the reason was not officially released, it was soon rumored that the trio had been bribed to play below their best during the season. Lang was already sidelined from the game by injury, but the late withdrawal of the other two meant that the Blues made four changes to the team. Out were Fraser, Gillespie, Bristow and Massey, replaced by former captain Jim Flynn, Sheehan, Wells and Wilson.

The crowd suspected that South Melbourne had been involved somehow with bribing the Carlton players, and they reacted by loudly supporting the Blues, while South's passages of good play were met with far less enthusiasm. It later transpired that the Southerners had done nothing wrong in fact, and their players went hard at the contest as a reaction to their treatment by the crowd. This resulted in a fiery game and a close contest. The Blues had their chances during the game, but inaccurate kicking in the first half cost them dearly. Trailing by 9 points at half-time (despite having 13 scoring shots to 7) Carlton's attacks were just not rewarded often enough, and the final margin of 12 points was a fair indication of the difference between the two sides.

Afterwards, the VFL investigation into the affair concluded that Doug Gillespie was innocent, but that Lang and Fraser each had a case to answer. Both were found guilty and suspended for five years, although Lang would later return to play for the club in 1916.

Having finished on top of the ladder, Carlton had the right to challenge the team that won the following weeks Final between Collingwood and South Melbourne, which of course we did immediately after the Magpies beat the Bloods by 11 points in a spirited contest.

Sinister, Sensational, and Unsavory Allegations - Services of the Three Leading Carltonians Dispensed With.

Government House in the back ground.
Image; Trove, Leader September 24 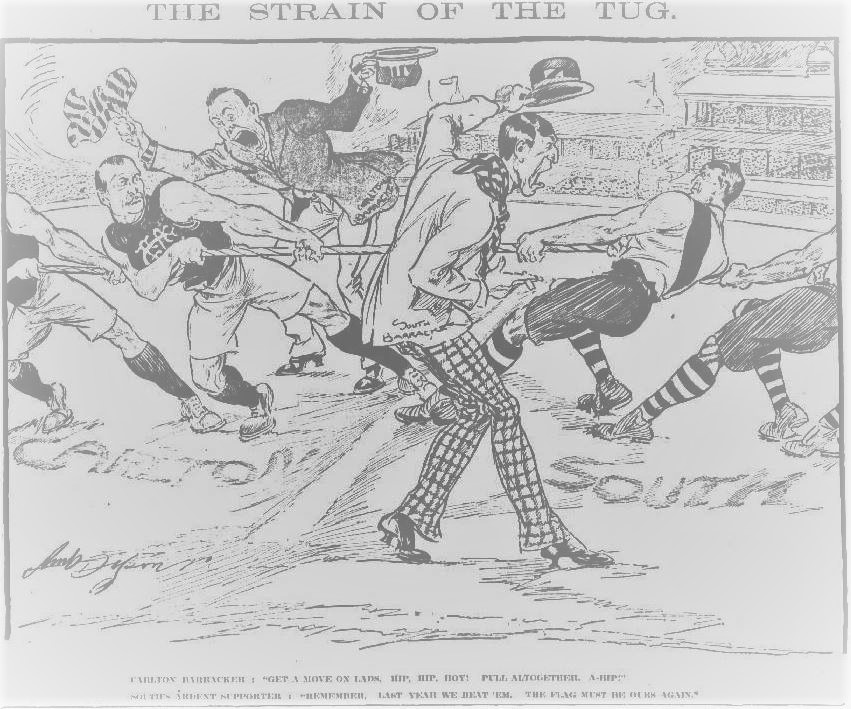