Carlton lose to Fitzroy by 1 point at the M.C.G.

Carlton were extremely wasteful in the match, and didn't score their first goal until 18 minutes into the second quarter. At half-time the Blues would trail by 11 points despite having more scoring shots.

The team was thrown around in the third quarter, with Keith Warburton moved into the middle, and George Ferry to full-forward. The moves paid off, and Carlton kicked the first three goals of the term to hold a 4-point advantage at the last break. Into the last quarter. Fitzroy regained the lead, but late in the match Carlton managed to draw level. It was then - with only a minute to go, that Fitzroy's captain Alan Ruthven snapped a behind to give the Gorillas the narrowest of wins.

It later transpired that star forward Keith Warburton had received a heavy blow to his abdomen early in the match, although he seemed to recover and played on. Then at the Blues' end of season celebration that night, Keith suddenly collapsed and was rushed to hospital. After an emergency operation to stem internal bleeding, his condition deteriorated and only the use of continual blood transfusions saved his life. Happily, he recovered and was back to play for the Blues in 1953.


Keith Warburton lies gravely ill
Keith Warburton, the Carlton centreman in the First Semi Final, is still seriously ill at Prince Henry's Hospital, though doctors say his excellent physical condition helped him through the main crisis. Warburton suffered a knock in the Blues one-point loss to Fitzroy, but thought nothing of it at the time. Near midnight at a club dance, he collapsed and was discovered to be suffering from a severed artery leading to the bowel. He underwent a three hour operation on Sunday, and has been given almost continuous tranfusions of blood since. Team-mates, friends and the football public have responded magnificently to appeals by the Blood Bank. It is expected that Warburton will be off the danger list tomorrow. - 100 Years of Australian Rules Football. 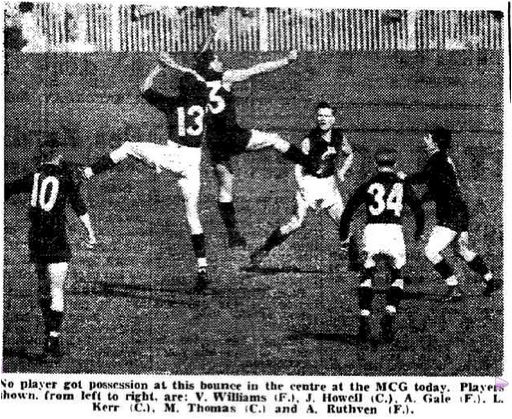