In a boilover, Geelong beat the Blues by 33 points at Waverley.

Geelong fans talk of their finals pain in the 1990's, with 3 Grand Final losses, but this day was a day of sweet revenge for the Catters. On driving into Waverley we heard on the radio that the Cats had lost Bairstow, Couch, Gary Hocking and Michael Mansfield (who took the votes against us earlier in the year) and would have to play their Emergencies. Carlton, other than the shock of losing to Melbourne the week before, would be in good shape and should win the game.

But it wasn't to be. The Cat replacements, including a phenomenal performance from stand-in midfielders Aaron Lord and Paul Brown, did the number on their much vaunted opponents and rocked us from the finals in straight sets. John Barnes would also play a key role for the Cats, winning the ruck and being found all around the ground.

Greg Williams again found a lot of the ball, but when Carlton teams of the era had less than 300 possessions you knew they were in trouble. At 282 stats, the Blues could not win the game.

This was to be one of the few games in Carlton history where Ablett would break his Silvagni shackles. Ablett kicked 6 with Silvagni going off in the first quarter with an ankle injury, replaced by Hanna at full-back, as the Cats pulled away with the win. 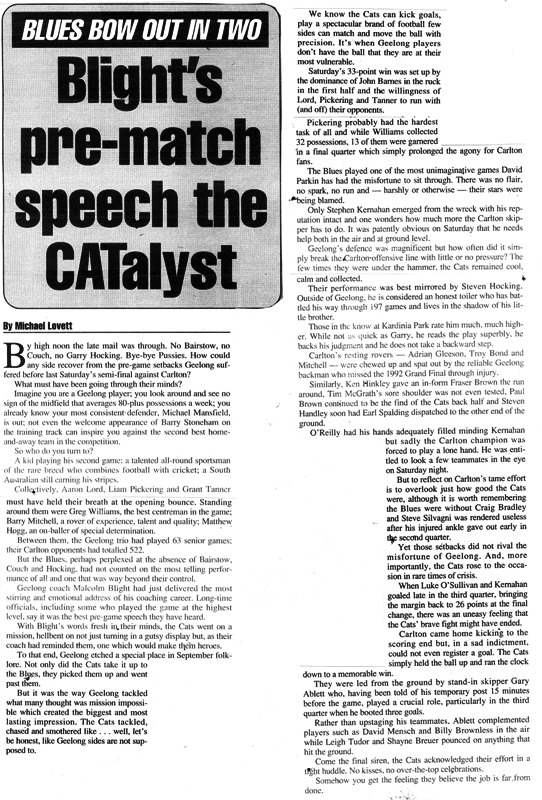 1979 - Blues to face fine over playing Robbert Klomp in a practice match?