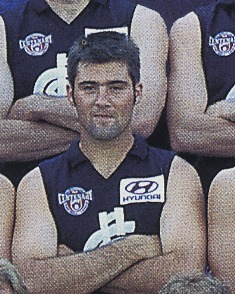 Steven Reaper played 23 games of Reserve-grade football for Carlton in 1996 after being recruited from Kyneton via TAC Cup team the Bendigo Pioneers. He had also previously been used as a top-up player for Collingwood Reserves in 1994. A big, imposing specialist full-forward, Reaper may have fallen short of AFL standard, but after departing Princes Park he went on to become one of the all-time great country goal-kickers – at first with Kyneton, and later with Gisborne in the strong Bendigo Football League.

His coach at Gisborne – former Collingwood Premiership star Mick McGuane – rated Reaper’s accuracy in kicking for goal alongside that of AFL Legend Tony Lockett. “He was right up there with Tony as the most accurate shot at goal I’ve ever seen,” said McGuane. “He was a strong build for a country footballer, and was lightning quick off the mark. But he had no endurance – he was a one-trick pony. Full forward was his spot.”

Renowned for his self-confidence, which he often used to intimidate his opponents, Reaper kicked more than 100 goals in a season on four occasions. He was the BFL’s leading goal-kicker five times, and played in four Premiership teams (two each at Kyneton and Gisborne). In claiming back-to-back flags in 2002-03, Gisborne lost just once in two seasons. Reaper was the Tigers’ top goal-kicker in both those years (with 70 and 102 respectively) as well as Best and Fairest in ’03.

While enjoying his football, Reaper also studied accountancy, and obtained a Bachelor of Commerce degree. Since his retirement from the field in 2008, he has steadily climbed the corporate ladder, and in 2011 was appointed CEO of the Victorian Country Football League.

Note: At the end of the 2013 season the Bendigo Pioneers Football Club named it best team of 21 years, the team included three players (Andrew Walker, Luke Livingston and Damien Lock who had played senior football with Carlton and another three players Steven Reaper, Simon Rosa and Michael Braun) who had a run with the Carlton reserves team (the latter player was to become a premiership player with the West Coast Eagles). The team was compiled with the help of former and present Bendigo Pioneer coaches that included two former Carlton players Brian Walsh and Tony Southcombe.

Steven Reaper (Kyneton, Gisborne): Big Bundy wasn’t afraid to let others know of his achievements, but what achievements they were. Five-time winner of the BFL goalkicking Ron Best Medal, he topped the 100-goal target four times and racked up 830 majors. A booming kick Reaper could land goals from outside 50 metres without fuss. Premiership player in 2002 and 2003. All-time leading goalkicker at TAC Cup’s Bendigo Pioneers with 132. - The Footy Almanac; Richard Jones. 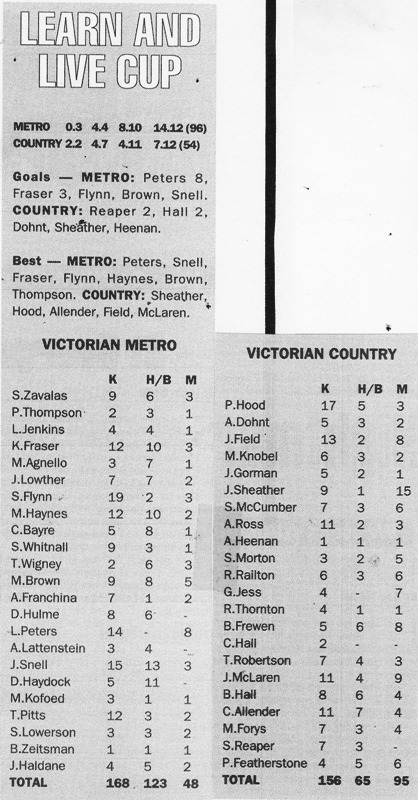 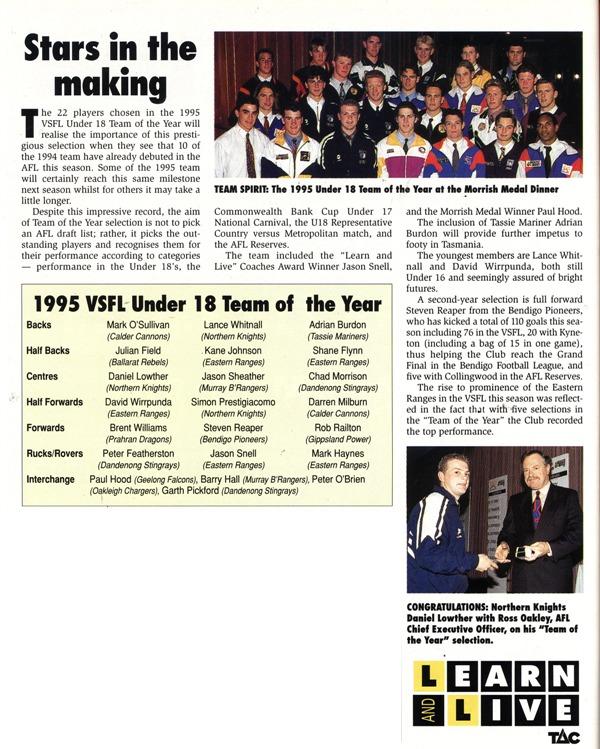 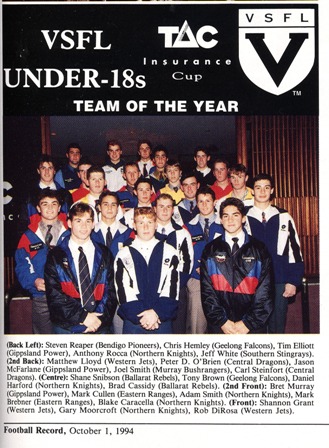