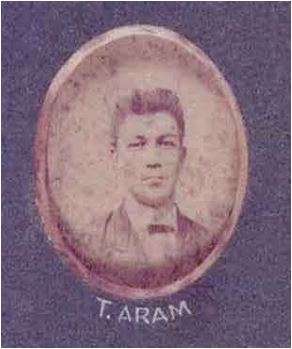 T. Aram appears in the photo of the 1871 Carlton Football Club side "Winners of the South Yarra Presentation Cup."
(For photo click here > 1871 )

1875 Aram is named in The Argus to play in a Carlton 25 side against a Carlton First Twenty in a scratch match at Royal Park on Saturday 8th. May.

1891 June 13
T. Aram was named in a "old players" Carlton team squad of 25 to play a similar Geelong team on the MCG in a charity match.

1916 September 17
In Perth a patriotic match between former players was held between Victoria and Rest of Australia on the Association Cricket Ground to raise funds for the war and charities.
Former Carlton players to take part were;
B. Murphy, W. Walton, J. Geddes. T. Aram, C. Coulson, and A. Gellatly.