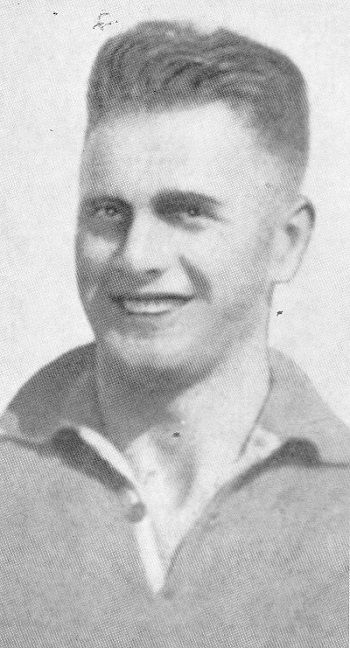 A vigorous ruckman who was born in Nhill and recruited by Carlton from Ararat, Thomas Charles Byrne had already played briefly with VFA clubs Williamstown and Prahran - as well as Fitzroy Reserves - before joining the Blues on the eve of the Great Depression.

Byrne wore guernsey number 18 on debut against South Melbourne at the Lakeside Oval in round 4, 1929. Handed the big responsibility of leading Carlton’s rucks, Tom did well as the Blues won a thriller by 6 points. Another win over North Melbourne in round 7, and a loss to Richmond in round 13 followed, before Byrne saddled up for what was to be his last outing for Carlton in the return match against South Melbourne at Princes Park in early August. Blues champion full-forward “Soapy” Vallence made history that afternoon, kicking a record 11 goals as Carlton beat the Lakesiders by 36 points.

Byrne departed Princes Park after that unforgettable day, and – probably lured by a bigger pay packet – rejoined Williamstown. At that time, the VFL and the VFA were fierce rivals, competing against each other for players, spectators, publicity and sponsorship. Williamstown was one of the Association’s stronger clubs, renowned for paying their players well, but expecting excellence in return. In a five-season career with the Seagulls, Byrne rose to vice-captain the club, and was a regular inter-league representative. Meanwhile, outside of football, he embarked on a new career with the Victorian Police.

In 1935, at the height of the Depression, Byrne was lured back to VFL football with Hawthorn. Over the next five seasons, he gave the Mayblooms yeoman leadership as a ruckman-forward, and kicked 70 goals in 61 games. His last match was a defeat by St Kilda at Glenferrie Oval in July, 1939 – only a few weeks before the outbreak of World War II.

Byrne served with the Police throughout the war years and eventually became a Senior Detective. He passed away at Fitzroy on the 23rd November, 1984, aged 75.

After Wall Street crashed in 1929, the Great Depression began. Australia, along with Canada and Germany were the hardest-hit economies. Unemployment in this country reached 30% in 1932.

The Williamstown Chronicle of May 7, 1932 reported that the Williamstown Football Club was trying to obtain a job for Tom Byrne. He said he would continue playing with Seagulls for 12 shillings ($1.20) per week if they could find him employment, however, he had also been offered three pounds ($6.00) per week to return to Carlton.