A winger from Williamstown. 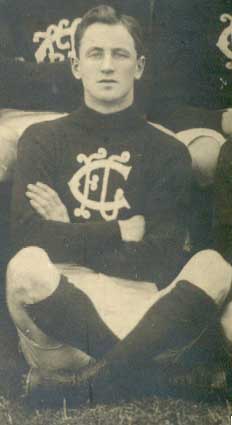 A speedy winger who began his senior football career at Williamstown in the VFA before moving on to Leopold (Geelong), Thomas Albert Clancy played his first VFL match for South Melbourne in 1908. He left the Lake Oval at that season’s end however, and in 1910, turned out for Carlton in the first of his 74 appearances for the Blues.

Clancy produced an impressive debut season at Princes Park, but it ended in bitter disappointment with defeat by Collingwood in the 1910 Grand Final. A spiteful, rugged clash, that game is credited with sparking the intense rivalry that still endures between the Navy Blues and our inner-city neighbours from the wrong side of Nicholson Street.

Over the next few seasons, Carlton continued to play competitive football and made the finals again in 1911 and 1912 - only to be knocked out of contention in both years by the eventual Premiers Essendon. Still, one of the consolations to come from those defeats was Clancy’s consistent form. A blossoming big match performer, he was among the Blues’ best in each of his finals games.

In 1913, Carlton slumped to sixth, before bouncing back to the top of the VFL ladder by the time Great Britain declared war on Germany in August, 1914. As World War 1 began, Carlton confidently embarked on another finals campaign, and claimed the club’s fourth VFL Premiership with a gutsy 6-point Grand Final victory over South Melbourne.

Surprisingly, Clancy did not play at senior level at all during that final series. A dispute had arisen between Tom and his coach Norman Clark (whose discipline did sometimes rankle players) and that led to Clancy’s absence – as well as his abrupt resignation during the Premiership celebrations. Adding further to the animosity, Clancy transferred to Collingwood the following year, where he racked up another 18 senior games over two seasons.

Because he played at a time when individual player numbers were being phased in, Clancy is known to have worn at least four different numbers during his stay at Princes Park.

In 1912 Carlton's Tom Clancy was selected on the wing for a VFL team to play a Bendigo representative team at Bendigo on Wednesday July 03.
Billy Dick was vice captain of the team and the match was due to commence at 4pm!
The League team won easily 18.11 - 4.5
Clancy was mentioned in the Bendigo Independent's report.