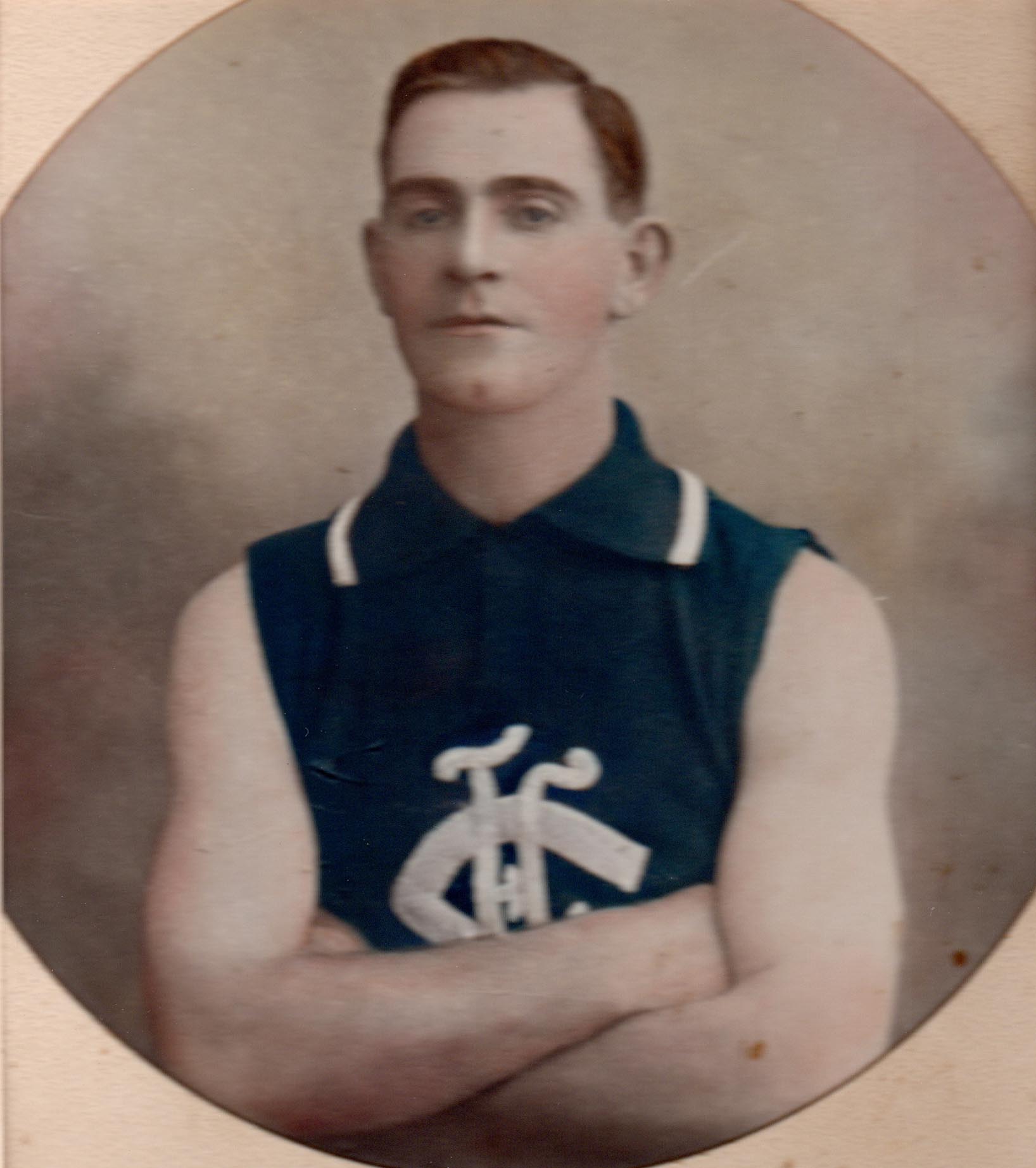 
Even though Thomas (Tommy) Hart was wounded while fighting for his country in World War 1, it didn’t prevent him from becoming a post-war star with SA club Norwood, after a one game stint with West Adelaide in 1919. Carlton tried for more than twelve months to entice the flashy half-forward to Princes Park, and eventually succeeded in 1923. But sadly for both Hart and the Blues, he arrived at a time when the club had fallen into disarray, and morale was low. After completing just one promising season, Hart packed up and returned to South Australia.

Tom Hart was born in Trentham East, Victoria, but grew up in the outskirts of Adelaide. He played senior football with the SA Redlegs, Norwood, before enlisting for military service in 1916. A year later, he was fighting with the Australian infantry in France, and was wounded in action three weeks before his 21st birthday.

Hart spent a month in hospital and many weeks recuperating, then was assigned to further training as a signaller. He was preparing to return to front line duty when the Armistice ended hostilities at last in November, 1918. Tom returned home to Adelaide in early 1919, but this time elected to play with Norwood.

Hart quickly developed into a brilliant half-forward flanker. He had pace, guile and a dangerous eye for the goals, and it wasn’t long before he was being regularly approached by representatives of VFL clubs, including Carlton. The Blues were determined to get Hart to Princes Park, and finally succeeded in 1923. Having lost a cliff-hanger Semi Final to Essendon by 5 points the previous year, the Blues believed that they were only a player or two short of becoming a real flag threat, and saw Hart as the type who could give the whole team a lift.

Wearing guernsey number 19, Hart kicked two majors from a half-forward flank on debut against Collingwood in round 7, 1923, and spent the rest of the season alternating between the flank and full-forward. But his nine matches for the Blues produced only four wins, and the fist-fight in the rooms that occurred between two of his team-mates (George Bolt and Jack Morrissey) following a heavy defeat by Essendon in round 13, was indicative of the mood of the team for most of the year.

Carlton rounded off that forgettable year with an 11-goal hiding from Geelong at Corio Oval. That defeat relegated the Blues to seventh place on a the 9-team ladder, so somewhat understandably, Tom Hart wasted little time in heading back to Norwood for the first part of the 1924 season. Failing to find form he ended up at West Adelaide where it all began for the rest of the season. Afterwards Tom ‘went bush’ as a railway fettler and ganger with the Commonwealth Railways. He was still doing this hard, physical labour well into his thirties, when the world was plunged back into chaos with the advent of World War II in 1939.

Tom immediately stepped up again to serve his country. This time he wasn’t allocated to combat duty, due to his age and previous service. But he spent another two years in uniform, and was promoted to the rank of Sergeant before he was discharged by a grateful nation for a second time.