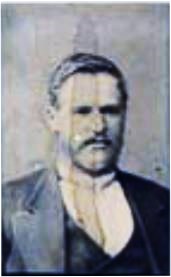 Left; This is Thomas Culbertson Hope M.B.* (born 4/9/1849) who attended Scotch College Melbourne in 1861, and studied medicine at Melbourne University. (died 16/3/1913)
This image is taken from the 1870 Melbourne University Rowing Crew, from the book, "Well Rowed University" by Judith Buckrich.
Most likely this is Hope, the Carlton player, as he was a fellow medical student and friend of Carlton player Dr. Jim C. Duncan
.*M.B. means Bachelor of Medicine, Bachelor of Surgery.


"Great in a scrimmage" and one of the leading players for 1867.
(Centenary Souvenir of Carlton Football Club. p6)

Match details for 1867 are sketchy with many match teams missing. So far he doesn't appear in any of the senior teams found. However, he may have played in the Second Twenty which details of are even more obscure.


The 1876 edition of The Footballer has an article "A Half An Hour With An Old 'Un".
A former player is writing about the footballers he played with and against.
Talking about Carlton players he says "Tom Hope, great in a scrimmage".