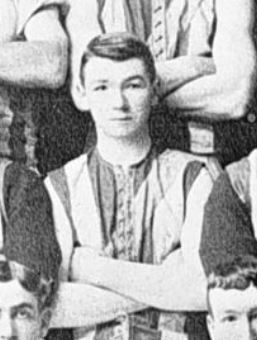 Described as ‘a redhead who did not know the meaning of fear’ Tom ‘Tammas’ McCluskey played VFL football at both Carlton and Fitzroy, with his fourth and last appearance for the Blues coming in the 1910 Grand Final loss to Collingwood. He later joined Footscray in the VFA, and helped drive the Tricolours to a Premiership. After volunteering for military service in World War 1, he was killed in action less than three weeks after joining his unit on the Western Front in October, 1917.

Tom was born into a large family of ten children at Kyabram in northern Victoria. His father (Tom senior) farmed, and ran a general store in nearby Mooroopna, where the McCluskey brood spent an idyllic childhood. Of proud Scottish stock, Tom senior imbued his six daughters and four sons with a strong work ethic. Combined with the national trait of stubborn determination, this gave all his children a solid foundation for a productive life.

Like most Victorian youngsters of his generation, Tom junior began playing football at state school. By his late teens he was working as a wool classer, and playing impressive senior football in Shepparton on Saturdays. Sometime in the summer of 1909-10, Tom, (whose family nickname of ‘Tammas’ would soon find wider useage), was invited to Princes Park by the Carlton Football Club.

He was forced to bide his time and sharpen his skills with Carlton Juniors at first, before being selected on one half-back flank in the Blues’ senior team to play Richmond, four days before his 20th birthday in August, 1910. Three other Blues recruits; Jack Bristow, Archie Wilson and John 'Jack' Massey, also made their debut that day, as Carlton beat the Tigers by 17 points at Princes Park.

On a half-back flank, McCluskey was solid all match and held his place in the team for the last home and away match of the season (a surprise defeat by St Kilda at the Junction Oval). Despite going down to the Saints by two goals, Carlton topped the ladder, two wins clear of Collingwood, and seemed headed for a fourth Premiership in five seasons - until just one hour before the bounce of our Semi Final against South Melbourne.

In a sensation, Carlton removed three players - Alex Lang, Doug Gillespie and Doug Fraser - from the team and replaced them with reserves Dick Harris, Bill Goddard and former club captain Jim Flynn, amid allegations that the three players dropped had been bribed to play poorly.

Despite being thrown into disarray, Carlton put up a surprisingly spirited effort against the Bloods. We trailed by just 5 points at three-quarter time, but inaccuracy late in the game proved costly, and South won by two goals. At centre half-back, our vice-captain Billy Payne played hard, determined football all day to keep the Blues in touch, well supported by a resolute McCluskey on the last line.

Collingwood then did Carlton a huge favour by knocking South Melbourne out of contention in the Preliminary Final. This gave the Blues one last shot at glory, because under the finals system then in place, as minor premiers we had earned the right to challenge the Magpies for the flag.

The Collingwood-Carlton Grand Final of 1910 was the first Premiership decider between these two clubs, and it set the stage for what remains the most passionate of all football rivalries. In the week prior to the game, Doug Gillespie was cleared of the allegations made against him, and was welcomed back into Carlton’s team at full-back. This allowed Tammas McClusky to return to a half-back flank when the teams ran out onto the MCG before a crowd of almost 43,000 fans on Saturday, October 1, 1910.

The Grand Final erupted into open warfare after half time, as Carlton strove to peg back Collingwood’s early break. Fists and elbows were thrown like confetti as both teams went as hard at the man as the ball, but eventually Collingwood held on to win their third Premiership by 14 points. Four players – two from each side – were reported and given long suspensions.

That torrid match was Tammas’s last for the Blues. For reasons that remain unclear, he left Princes Park that same year and crossed to Fitzroy, where his five matches in 1911 were unremarkable. Only when he switched clubs a third time - to VFA heavyweights Footscray in 1912, did he step back into the football limelight.

Settling into centre half-back for the Tricolours, McCluskey quickly became one of the real stars of the competition. When Footscray beat North Melbourne by one point in the 1913 VFA Grand Final, he was hailed a western suburbs hero after his best on ground display. In 1914 he captained the club into the finals again, but the looming threat of war in Europe cast a pall over all festivities.

McCluskey enlisted in the Australian Imperial Forces at Royal Park in November, 1916. After basic training, he was allocated to the 7th Draft of reinforcements of the 3rd Division and sailed for England in February, 1917. More training followed, until September of that year when joined his battalion in time for another major attack by Commonwealth forces on October 4.

On the first day of that offensive, the Australians had gained ground and were consolidating their positions when German artillery launched a fierce barrage on their hard-won territory. McCluskey was standing in a shell hole with two other men when a shell landed right between them.

Nearby, Private J.B. Timms saw the explosion and ran to help. In a letter home afterward, he described what he saw; ‘Tom had been killed instantly. Smith was also dead. One chap was wounded and the other had escaped free except that he got a bit of a shaking up. I had a look at Tom and saw that a large piece of shell had gone right through his heart.’

Tammas McCluskey was buried by his mates in the shell crater where he died. They left a crude cross with his identity disc wired to it to mark his grave, before they resumed their advance under heavy fire the next morning. Sadly, Tom’s remains were never recovered, because later heavy shelling totally destroyed the landscape.

Now, Tom’s only memorial is his name and his regimental number, carved into the walls of the Menin Gate War Memorial at Ypres, Belgium. He is one of 54,000 British and Empire soldiers with no known grave.

Tom had another nickname due to his red hair, at the Shepparton Football Club he was called "Rusty."

Articles: Glory with your first steps | The Blues at War