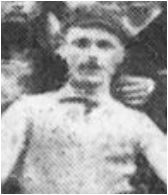 Nosworthy had come from Sandhurst to Melbourne to live, but although he had a permit from Sandhurst he had not bothered to hand it into the V.F.A.
(The Carlton Story, H.Buggy and H.Bell p53)


1883 August 12
Played in the win against Hotham at the East Melbourne C.G.

1883 August 19
Nosworthy named in team to play Melbourne at the East Melbourne C. G.
This match did not take place as Carlton were feuding with the V.F.A. over the season ending suspension dealt to George Coulthard for the match against Hotham.

1884 June 30 Monday
T. Nosworthy was named in the Port Adelaide team that played Carlton on the Kensington Oval.

1886 June 26
Carlton played Sandhurst in Bendigo. The Bendigo Advertiser (June 29) in it's match report said there was a A. and a T. Nosworthy playing for Sandhurst. Was this T. Nosworthy the same person?

An item in The Argus Monday September 9 1935 p14
At the Carlton - Footscray match at half time, 100 former players were entertained by the committee.
Among the former captains who toasted the health of the veterans was a Tom Nosworthy (1890).
(Was he a Reserves/Second Twenty captain?)