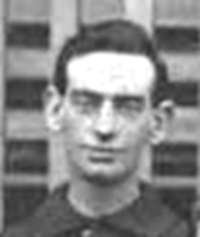 Prior to joining Carlton in 1925, Victor 'Mick' Davis had enjoyed a spectacular few years with Preston Juniors. A lively, long-kicking full-forward, he had been Preston’s leading goal-kicker in 1921 (79 goals), 1922 (56) and most impressively, 1924 – when he steered through 98 majors. He was Preston's top full forward in V.J.F.A years 1921 (when his five goals were instrumental in Preston's premiership), in 1922, and again in 1924 with 233 goals from 55 games. Davis narrowly missed being Preston's first 100-goal kicker with 98 in 1924 after playing with Northcote in 1923. That last effort convinced Carlton to give the 22 year-old a chance at VFL level, and Davis made his debut in the goal square for the Blues against South Melbourne at the Lake Oval in round 1, 1925.

Unfortunately for the visitors, the Bloods spoiled the occasion when they won by 38 points. Davis didn’t trouble the scorers, and had to wait until the following week to kick his first goal in the VFL. But he got four against North Melbourne in round 9, and by the end of that quite dismal season for Carlton, had racked up 21 goals in 11 games to show that he was worth persevering with.

While finishing ninth on the ladder in 1925, the Blues had blooded a remarkable 21 new players, and that process continued into 1926 when a lean youngster from Bacchus Marsh named Harry Vallence wore the navy blue strip on to the field in round 1, to begin a legendary career. With an established champion in Horrie Clover at centre half-forward, Carlton soon found itself in a quandary – how to fit Clover, Davis, Vallence and another promising forward; Hedley Blackmore, into the same side? 'Mick' Davis perhaps goes down in history as one of those players who was just in the wrong place at the wrong time.

Captain-coach Ray Brew and the match committee tried various options, but in the end it was obvious that Davis was once and for all a full-forward, and by late in the season, Blackmore had displaced him. Even so, Vic’s second and final year with the Blues was not without its highlights; he notched a personal-best five goals in a tight win over South Melbourne at Princes Park in round 4, and earned a place in Carlton’s history as a member of our first-ever Reserves Premiership team when he kicked three goals in a big win over Geelong on Melbourne Show Day at the MCG.

He then became the regular full forward for Carlton Seconds, and kicked 79 goals in each of three consecutive years from 1927. Carlton Seconds captain-coach during these years was Jim Goonan, and when Goonan joined Preston in 1930, he lured Davis back home. describing him as "the cleverest forward I've seen" Davis trained pre-season, but decided to retire before the opening game.

Davis was born in the Bendigo suburb of Eaglehawk, he passed away on the 2nd September, 1981 aged 79.